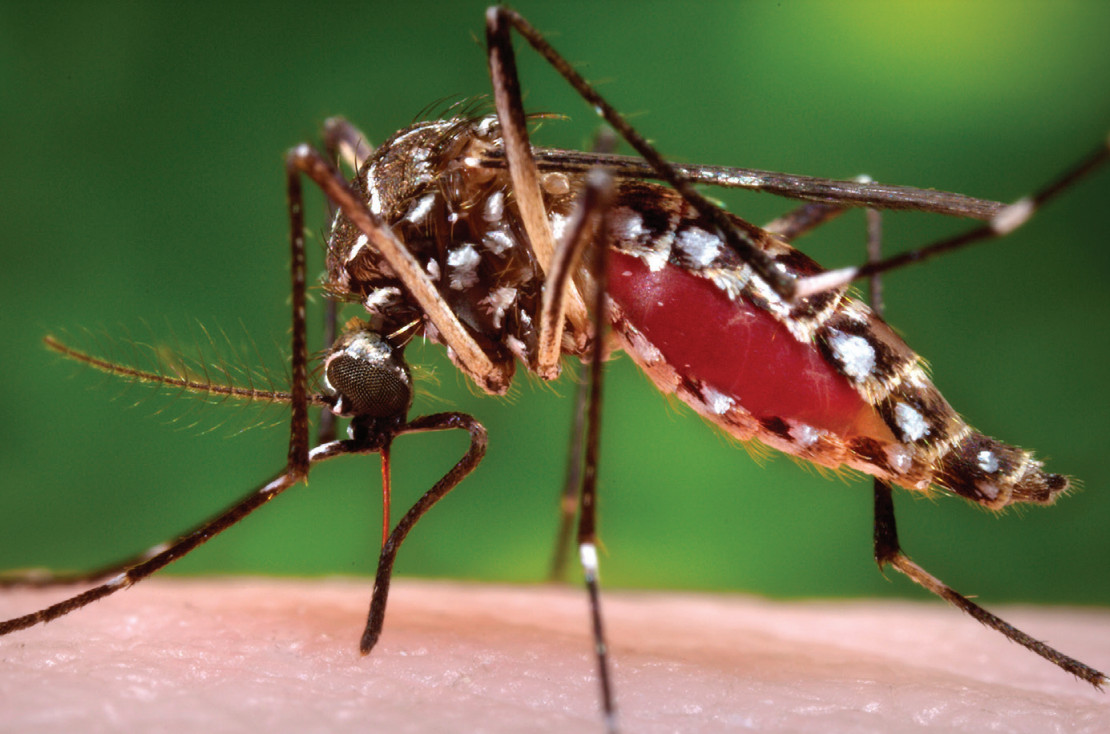 HONOLULU - The State Auditor details confusion and discord in the Department of Health during the 2015 Big Island dengue fever outbreak, as well as other outbreaks.

(BIVN) – A new report is criticizing state health officials for their response to disease outbreaks in Hawai‘i. The report, Audit of the Disease Outbreak Control Division of the Department of Health, focused on the dengue fever outbreak on Hawai‘i Island that occurred in 2015, as well as outbreaks of hepatitis-A involving frozen scallops on O‘ahu and Kaua‘i, and salmonella-infected ogo on O‘ahu.

“We found that, during these outbreak responses, the Disease Outbreak Control Division (the Division) and the Department of Health (DOH) experienced communication breakdowns with other DOH divisions, State and County response representatives, and the general public,” the Auditor’s Summary stated. “During the outbreaks, DOH did not have a formal communications plan that would have provided established guidance on issues such as the timing of the first public announcement about the outbreak and procedures for sharing outbreak information with other agency officials. The confusion and, at times, discord, may have been avoided if DOH had established and followed a full communications plan.”

The audit also revealed the Division has inconsistent processes and procedures for record keeping, internal reviews, and reporting. “We note that neither DOH nor the Division could provide us with a comprehensive account, timeline, or summary of the outbreak responses,” the auditor wrote. “In addition, the Division does not follow the disease specific investigation protocols it does have in place.”

The health department and the Disease Outbreak Control Division should formalize communication plans, the auditor found, and “consistent end-of-outbreak reviews and reports would better prepare the Division for future outbreaks should be formalized.” The auditor also found that “lax procedures and records management may be hampering outbreak response.”

Dengue is spread to humans by infected Aedes mosquitoes, not human-to-human. “Although 75 percent of individuals infected with dengue fever will be asymptomatic,” the report states, “about 5 percent of individuals will progress to severe dengue. The case-fatality rate of severe dengue cases can be as high as 10 percent if untreated, or less than 0.1 percent with appropriate clinical management.” Although there were no reported deaths from the 2015 dengue outbreak on the Big Island, residents spent several stressful months watching the disease spread to all corners of the island.

The report zeroes in on one of the prevailing problems of “Patient Confidentiality vs. Protecting Public Health” as an example of a communication breakdown:

According to the Division chief and the County of Hawai‘i Civil Defense Director, they had differing perspectives on whether GIS maps based on patients’ addresses should be shared with the County, and once disclosed, how such information could and should be used to respond to the outbreak and protect the public health and safety.

The auditor put together a timeline of the dengue fever outbreak on Hawai‘i Island.

October 21, 2015
The Division receives a call from a doctor reporting a case of dengue fever infection. The case is assigned to a Disease Investigation Branch investigator, who interviews the patient to obtain demographics and illness history. Two other members of the patient’s family also show symptoms of infection. No recent travel was taken by the patient or family members; however, all visited Ho‘okena Beach.

October 24, 2015
The Division receives four additional cases of suspected dengue fever infection from mainland U.S. visitors who had traveled throughout Hawai‘i Island. However, the Division suspects that the cases could also be leptospirosis.

October 27, 2015
The Division epidemiologist starts GIS mapping to analyze the associations in case data by exposure locations and case status.

October 28, 2015
DOH State Laboratory Division confirms that the four additional cases have dengue fever. The results indicate to the Division that they are dealing with a widespread infection.

The October 28 confirmation was labelled by the auditor as a “break in the case”. However, the four cases were not disclosed as “confirmed” in the press release that went out the following day:

October 29, 2015
DOH releases a medical advisory to Hawai‘i Island healthcare providers to report patients who were evaluated on or after September 1, 2015, for dengue fever. DOH issues a press release notifying the public that it is investigating two confirmed and four probable cases of dengue fever. It posts a call for cases on the CDC’s Epidemic Information Exchange website to identify other suspected cases of dengue fever in travelers who had visited Hawai‘i Island.

Big Island Video News posted its first story on the outbreak on October 29, with the information that only two cases were confirmed, with four other possible cases under investigation. Aside from reporting the cases were locally acquired, no information was presented as to where the infections may have occurred.

On November 1, Big Island Video News posted a story detailing the experience of a pair of prolific internet vloggers, Charles Trippy and Allie Wesenberg, documenting their battle with an illness they believe was contracted on the Big Island during a recent visit. The pair joined others on a trip to Hawaii that began on October 13. Their popular CTFxC YouTube channel uploaded footage of adventurous visits to Honaunau in South Kona, South Point, and Hawaii Volcanoes National Park.

The auditor’s timeline continues with the events that occurred a few days later:

DOH releases a medical advisory to statewide healthcare providers informing them that dengue fever should be reported as soon as the infection is first suspected. The Division’s Dengue Outbreak 2015-16 website goes live.

The plan to spray at Ho‘okena represented another communication breakdown, the auditor wrote; this time with the County of Hawaii:

According to the former County of Hawai‘i Civil Defense director, County of Hawai‘i officials learned of the island’s dengue fever outbreak and the plan to spray Ho‘okena Beach for mosquitoes after the general public was notified. He said they were concerned about the Division’s lack of forewarning to and consultation with the County of Hawai‘i since Ho‘okena Beach is heavily used by campers, who should have been informed of the possible dengue infection in the area.

The contract ends in December 2015 after the contracted amount of $100,000 was expended.

The auditor connected the public relations contract to another communication breakdown:

DOH has one public information officer on staff, who is responsible for issuing press releases and media advisories, as well as arranging press conferences and media interviews, for DOH’s numerous divisions and officers. The public information officer said that she had difficulty receiving information from the Division, eventually having to request dengue fever outbreak details from the County of Hawai‘i district health officers and DOH Vector Control Branch staff. The Division’s lack of cooperation was not unique to the dengue outbreak.

November 9, 2015
“Fight the Bite” education and outreach campaign launches at a press conference held by the County of Hawai‘i Mayor’s Office to urge Hawai‘i Island residents and visitors to prevent, prepare, and protect against mosquito-borne diseases.

Although then-Mayor Billy Kenoi and then-civil defense administrator Darryl Oliveira stood side-by-side with Virginia Pressler, M.D., the director of the Hawaii State Department of Health and Dr. Sarah Park, the Hawaii State Epidemiologist and Chief of the DOH Disease Outbreak Control Division at the Yano Hall event, the county appeared to be – at that time – the one taking the lead. The event was also the first time the public was given a look at a new map, posted by the Hawaii Department of Health, confirming that the dengue fever outbreak had become an island-wide problem. 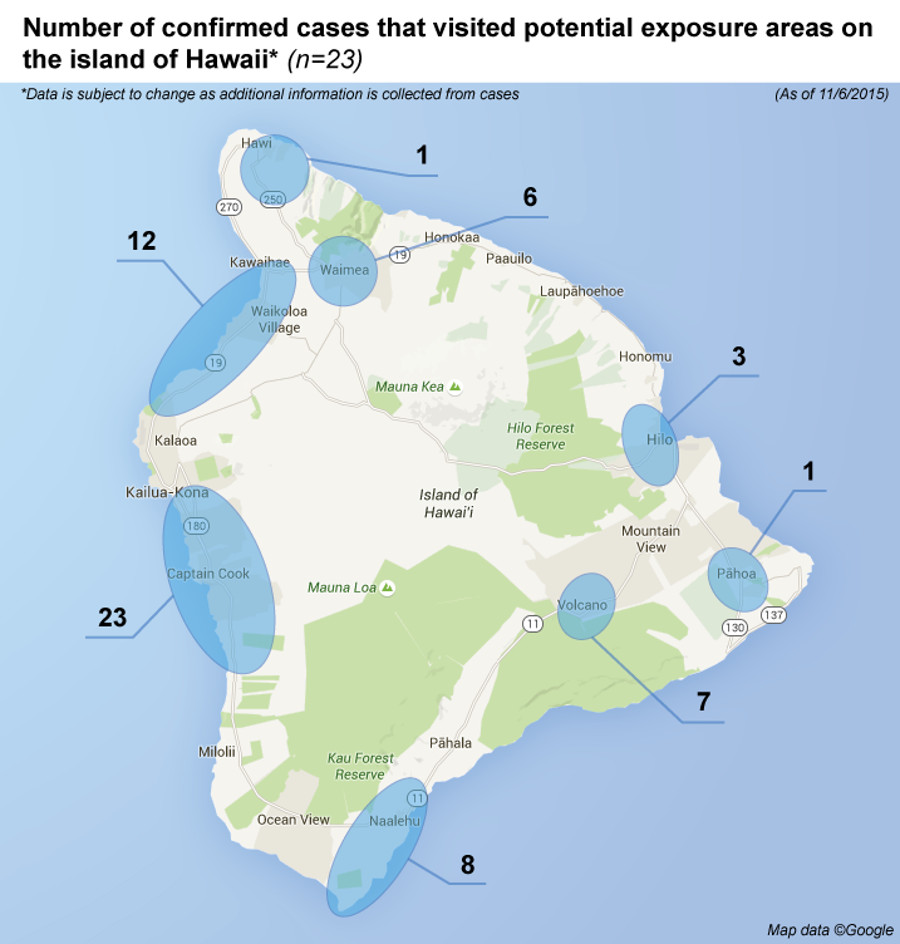 Although the map (above) provided the public with a desired visual of the outbreak, the presentation of the map would undergo numerous revisions. The state’s eventual dengue fever “risk” map would become a regularly-updated feature during the outbreak, and would differ somewhat from a county-produced map – one that offered pinpoint locations of each case – that was distributed concurrently.

November 19, 2015
DOH holds a press conference regarding the dengue fever outbreak featuring the governor, DOH director, Division chief, DOH Environmental Health Services Division administrator, and DOH State Laboratory director. During the press conference, they discuss the efforts by the County of Hawai‘i, the State, and others to get the outbreak under control.

The DOH director, the Division chief, and the former County of Hawai‘i Civil Defense director brief the State Legislature on the status of the dengue fever outbreak and their efforts to treat, monitor, and prevent further disease transmission.

December 8, 2015
CDC releases its interim assessment of the response by DOH to the dengue fever outbreak. Major findings of the interim assessment include the need for more epidemiologic staffing within DOH to address staff fatigue during current outbreaks; the need for entomology expertise for mosquito-borne diseases; and the need for a media strategy and effective communication within DOH, its partners, other agencies, and the public during an Incident Command Structure outbreak.

The state’s adherence to the Incident Command Structure was another “communication breakdown”, according to the auditor. Not only did state health officials fail to provide “the County of Hawai‘i and County of Hawai‘i Civil Defense director with updates on the number of cases, key demographics, or disease ‘hot spots,’ making it difficult for them to respond to the outbreak,” the health department apparently had trouble getting it straight in its own reports:

Hawai‘i County Civil Defense wasn’t the only agency feeling a little left out. The state’s Disease Investigation Branch, responsible for the investigation of nonvaccine preventable diseases like dengue fever, “was not an active participant in higher level meetings regarding this outbreak,” the auditor found. “Branch personnel were thus unable to gain a big-picture perspective of the outbreak and possessed limited information regarding new cases reported and updates to status counts. The branch was not aware that CDC had been invited to consult on the dengue fever outbreak and was not included in laboratory results meetings with them.”

By now, health officials and lawmakers were openly bickering over the response.

The auditor’s timeline continues into 2016, with the total cases reaching 215:

January 13, 2016
DOH releases a medical advisory reminding healthcare providers to report cases as soon as they are first suspected.

February 8, 2016
The County of Hawai‘i mayor issues an emergency declaration for Hawai‘i Island.

February 12, 2016
The governor issues an emergency declaration for the State.

February 22, 2016
The Division epidemiologist creates epidemic curves of confirmed cases to display the course of the outbreak by onset date of illness and region of residence.

March 17, 2016
The last onset of outbreak illness is noted for all cases. The Division epidemiologist prepares the final statistical analysis software distributions based on key demographics as the last case was reported.

April 15, 2016
The Division epidemiologist prepares the final GIS mapping based on the last onset of illness.

November 3, 2016
The after-action report and improvement plan is completed by DOH. DOH staff report a need to improve communications between department divisions, between State and County response representatives, and between DOH and the public. Participants also feel that the implementation of incident command structure could have been better, as some report confusion over DOH and County responsibilities. Participants also state that DOH does not have enough trained personnel to fully monitor and manage all aspects of communications.

“As a result of the issues that arose during the dengue fever outbreak,” the auditor stated, “and as part of the department’s Zika virus preparation, the DOH Environmental Health Administration deputy director was tasked with developing the Joint Hawai‘i Mosquito-borne Disease Outbreak Emergency Operations Plan to provide essential and evidence-based guidance to State and County agencies prior to, during, and immediately after a mosquito-borne disease outbreak. At the time of our audit, the plan was still in draft form.”

The report was equally critical of the state response to the outbreaks of hepatitis-A involving frozen scallops on O‘ahu and Kaua‘i, and salmonella-infected ogo on O‘ahu. The State Auditor is Leslie H. Kondo.