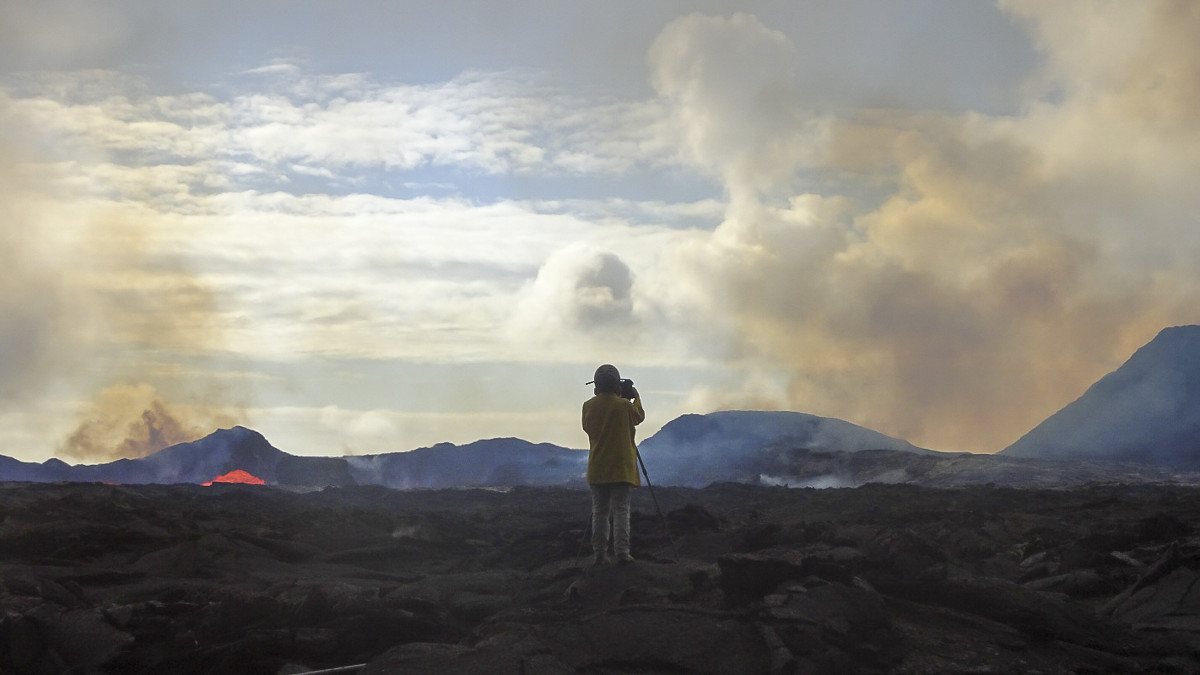 (USGS) An HVO scientist takes video of lava as it exits the fissure 8 cinder cone.

PUNA, Hawaii - Surging was noted at the Fissure 8 cone during the USGS overflight but it had stopped by the time ground crews arrived to verify it. 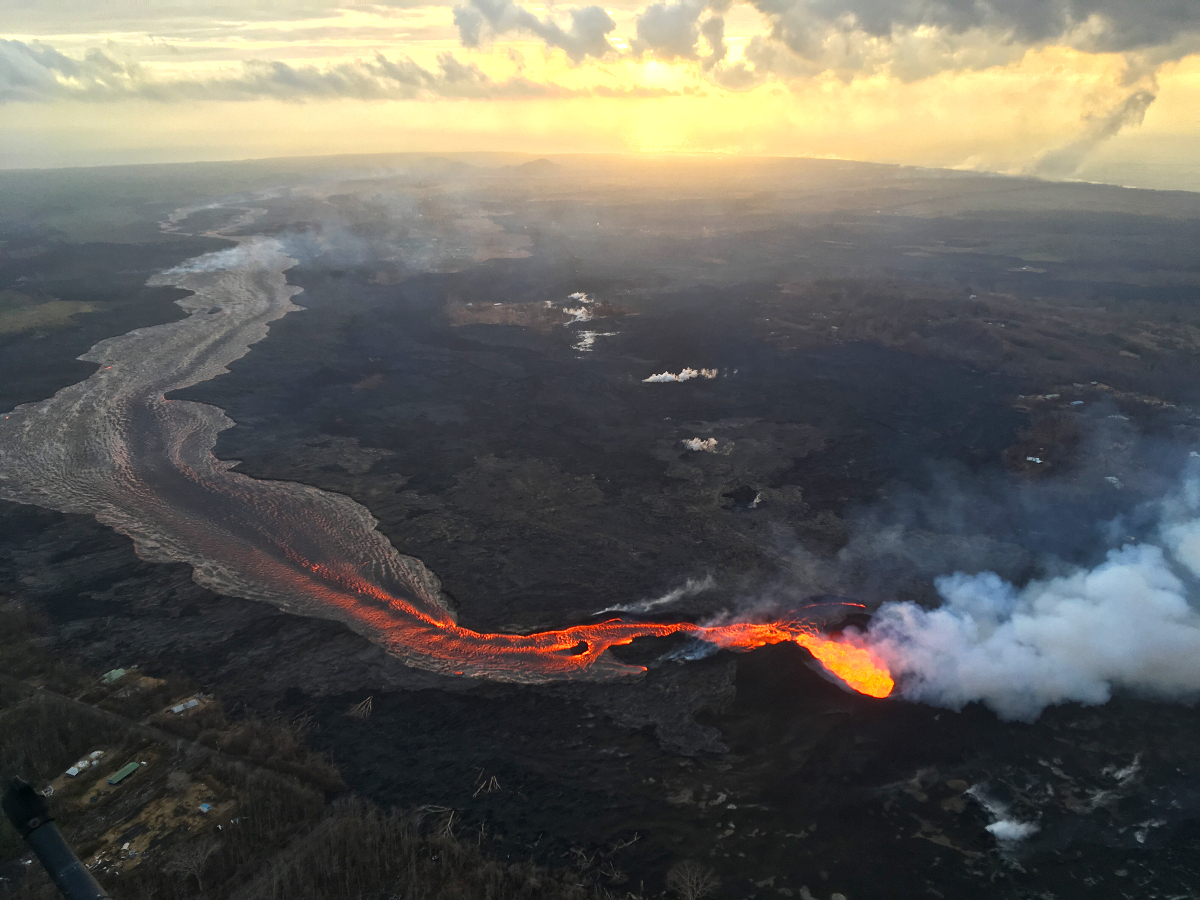 (USGS) During this morning’s overflight, USGS scientists captured this image of sunrise above Kīlauea’s lower East Rift Zone. Fissure 8 continues to feed a channelized lava flow that reaches the ocean, forming a large plume at the coast (upper right).

(BIVN) – Lava remains active on the south margin of the ocean entry and Fissure 8 on the lower East Rift Zone appears to be surging without obvious correlation to collapse/explosive events at the Kilauea summit.

After observing “no significant response at Fissure 8” following the summit collapse/explosive event at 11:42 a.m. on Monday, scientists today noted “surging at the Fissure 8 cone” – without a prior summit collapse/explosion – during this morning’s overflight, but added that it had “stopped by the time ground crews arrived to verify it.” The surging was noted by other observers on social media. (USGS) During their overflight, scientists used a telephoto lens to photograph the surface of the fissure 8 lava channel. Incandescent lava is visible through pieces of darker crust that forms as the flow surface cools. Note the apparent symmetry on either side of the channel center, where lava flows more quickly than it does along the channel margins—a visual representation of flow velocity across the channel width.

Lava in the channel is a bit lower this morning and there were no significant overflows, USGS said.

The southern margin of the lava flow was located about 750 m, or half a mile, from the boat ramp at Isaac Hale Park this morning, the USGS Hawaiian Volcano Observatory reported in a 1:43 p.m. update. “Despite no visible surface connection to the fissure 8 channel, lava continues to ooze out at several points on the 6 km (3.7 mi) wide flow front into the ocean,” the scientists stated. 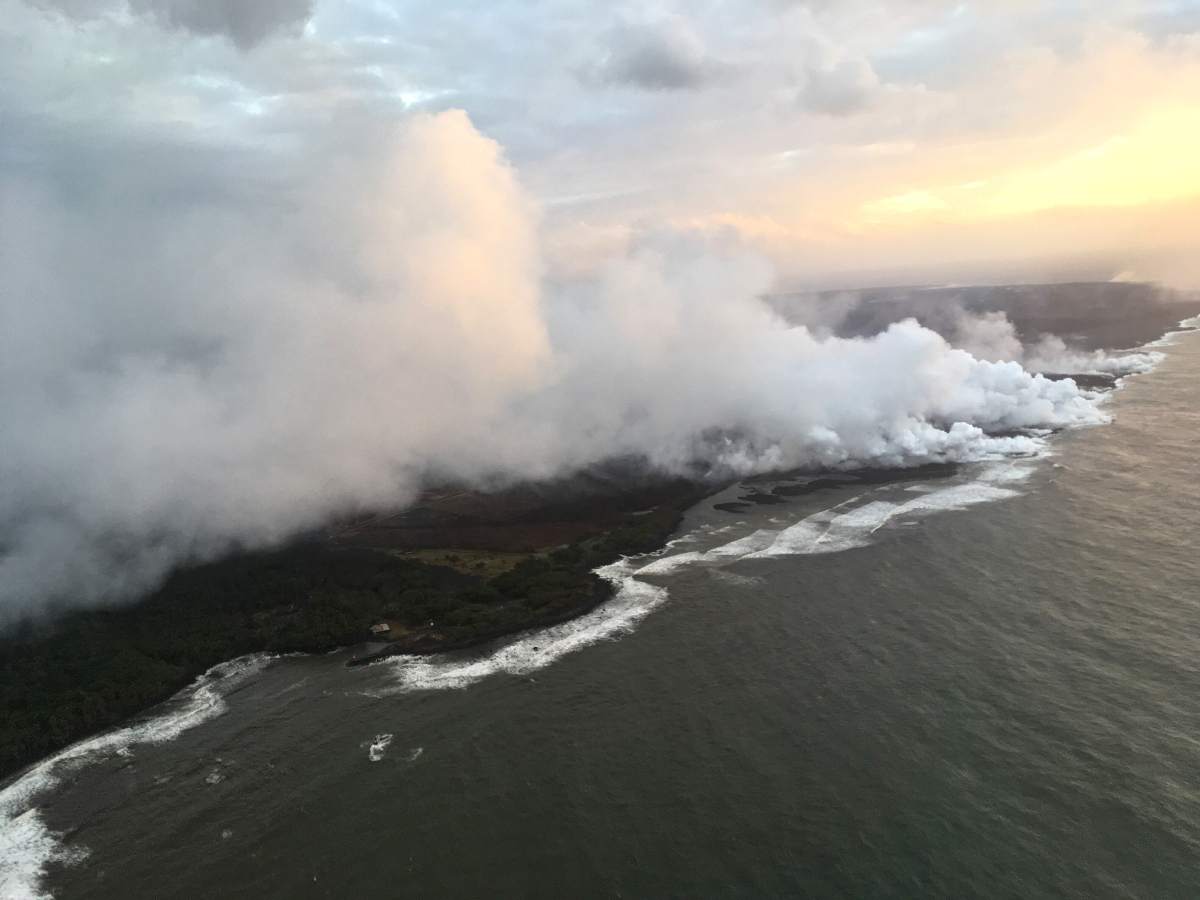 UPDATE: Stephen Schmelz, Hawai’i Island Branch Manager for the DLNR Division of Boating and Ocean Recreation (DOBOR) estimated today in a state media release that the lava, if it maintains its current course and speed, could overtake Pohoiki and Issac Hale Park within the next few days. “It would be a significant loss for the people of lower Puna and the Pahoa areas, as Pohoiki is not only popular as a launch ramp for small boats, it is used by a variety of ocean recreational users,” he said.

The state says DOBOR leadership has had very preliminary discussions about new ramp options should the flow overtake Pohoiki. Any plans would hinge on road access being restored and available funding. Schmelz added, “We are extremely mindful of the importance of Pohoiki for local people and as with everything related to Kīlauea’s current eruption we need to be patient and see what develops in the future. As one of our colleagues noted recently, Pele is very much in control.”

DLNR added: “Concerned citizens posting on social media have indicated that turtles are trapped in the Pohoiki area. Both today and during an earlier flight by the Hawai‘i County Fire Department no turtles were seen.”

No other fissures were active this morning.

Hawai‘i County Civil Defense and other agencies say they will be holding a community briefing on Thursday, July 19 at 6 p.m. at the Pahala Community Center, “to address scenarios of a possible explosive event at Halema‘uma‘u.”

“The briefing will discuss possible impacts and responses to such an event,” civil defense said. “The U.S. Geological Survey will provide a presentation. Staff from Civil Defense, the State Highways Division and the County Department of Public Works will be on hand as well to discuss roads and evacuation routes. The issues of sheltering and personal preparedness will also be on the agenda. American Sign Language interpretation will be available.”