Hawaii Volcanoes National Park, Hawaii – The Hawaiian Volcano Observatory continues to monitor the activity at Kilauea’s Halema`uma`u vent, using a thermal camera perched on an overlook.  The HVO says the active lava pond, about 40 yards across, is situated deep within the vent cavity, at a depth of about 200 yards. The lava surface […]

The HVO says the active lava pond, about 40 yards across, is situated deep within the vent cavity, at a depth of about 200 yards. The lava surface consists of slowly migrating crustal plates, with a spattering source on the east margin of the pond. The lava surface is slightly deeper than its usual level, owing to deflation during the current deflation-inflation (DI) cycle.

According to HVO, the above video shows lava in the vent upwelling at the northern margin of the pond (the upper margin in this view), which is “slowly migrating south towards the bottom of the image, where it sinks out of view. The pond is about 50 yards wide. Small spattering sources appear and disappear occasionally. This video was taken with a thermal camera (white is hot, dark blue is cold), which is able to see through the thick fume. No views were possible with the naked eye today due to the fume, and only loud gas roaring sounds could be heard.” 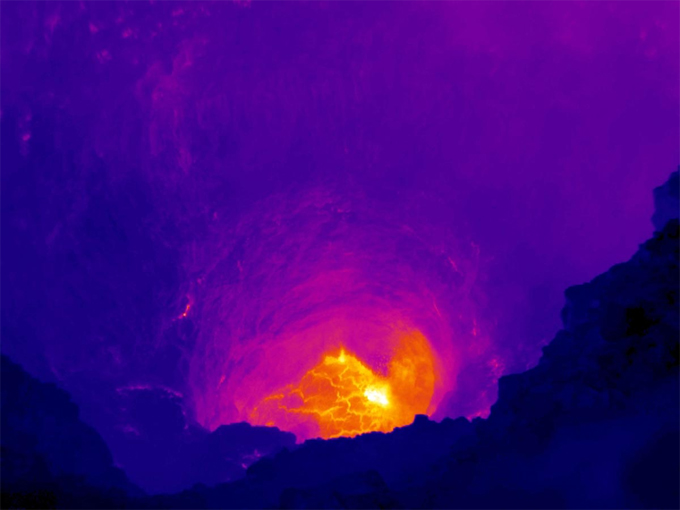 Before the sinking, the lava surface had risen to a slightly higher level, according to the Volcano Watch article published recently. HVO scientists say that with the higher lava level, the lava surface was occasionally seen to cyclically rise and fall over periods of several minutes.

Volcanic gas emissions remain elevated, resulting in high concentrations of sulfur dioxide downwind. The most recent sulfur dioxide emission rate measurement was 900 tonnes/day on March 5, 2010, still elevated above the 2003-2007 average of 140 tonnes/day. Small amounts of mostly ash-sized tephra were lifted out of the deep pit in ascending gases and deposited on nearby surfaces.

Scientists say the magnitude-4.5 earthquakedeep beneath Mauna Kea last night did not affect the Kilauea eruption.