November 1, 2010 – Hilo, Hawaii CORRECTION: The name for the new anthurium variety will NOT be picked at random. The best name wins, we are told. Ag minded visitors flocked to the University of Hawaii College of Tropical Agriculture and Human Resources’ Komohana Research and Extension Center open house in Hilo on Saturday. The […]

CORRECTION: The name for the new anthurium variety will NOT be picked at random. The best name wins, we are told.

Everyone also had a chance to suggest a name for a new, deep red anthurium variety created at CTAHR. The contest comes just a day or two after the news that the “Tropic Lime” variety, developed by university researchers and Hilo’s Green Point Nurseries, was honored in a nationwide competition.

According to a UH press release: 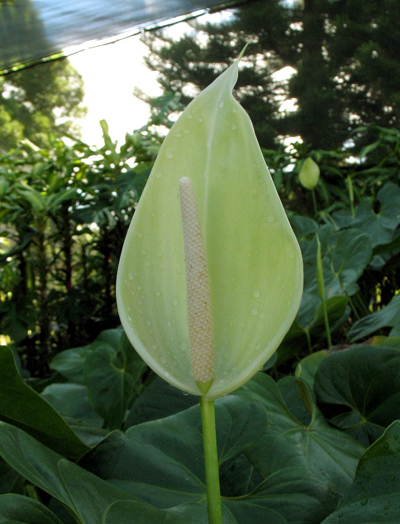 “Tropic Lime,” an anthurium developed by a team of researchers at the UH Mānoa’s College of Tropical Agriculture and Human Resources (CTAHR), has won a Red Ribbon in the Society of American Florists’ (SAF) 2010 Outstanding Varieties Competition. The anthurium was entered by Hilo-based Green Point Nurseries, one of the state’s largest cut flower producers.

The major attributes of “Tropic Lime” are its attractive, bright green, upright spathe borne of a straight, sturdy stem and its excellent vase life (about 27 days). Its stem has an average length of 24 inches. “Tropic Lime” can potentially yield about 6 flowers per plant per year and has a tolerance to bacterial blight.

“Tropic Lime” was developed by the CTAHR team of Heidi Kuehnle, Haruyuki Kamemoto, Tessie Amore, John Kunisaki, Janice Uchida, and Joanne Lichty. It originated in 1985 from a cross between two earlier UH varieties.

Kamemoto is credited for establishing UH Mānoa’s anthurium research program in 1950 to develop disease resistant and novel anthuriums for the flower industry. This highly successful program, presently managed by CTAHR horticulturist Amore, has released more than 40 new commercial varieties since 1963, which helped the anthurium become the state’s most valuable cut-flower crop.

Cut anthuriums had a farm-gate value of nearly $3 million in 2009.