December 11, 2010 – MAUNA KEA, Hawaii Video by David Corrigan | Mauna Kea webcams The day after a winter storm soaked the Hawaii Islands, residents on the Big Island awoke to find the summit of Mauna Kea covered in white. Meteorologists had predicted snowfall accumulation on the island’s highest point, so the event was […] 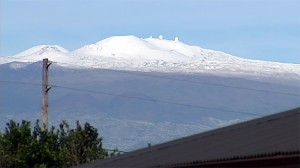 The day after a winter storm soaked the Hawaii Islands, residents on the Big Island awoke to find the summit of Mauna Kea covered in white.

Meteorologists had predicted snowfall accumulation on the island’s highest point, so the event was not a complete surprise. Still, it’s a welcome sight for locals who were disappointed by the lack of significant snowfall last winter.

“Fresh snow atop Mauna Kea, the most we have seen in a couple years,” wrote Andrew Cooper on his Darker View blog, a leading source of information for the happenings at over 13,000 feet above sea level. “It was not a lot, and what there is has drifted around quite a bit.”

Cooper reported that the observatories shut down last night because of the weather.

Although the convection/moisture in the area will continue to lose its upper-level diffluence/divergence as the trough responsible flattens out and lifts off toward the northwest, thick clouds and residual convection will deposit more snow at the summit through much of the night . Still, snowfall accumulations should not be very significant (and probably won’t stick around very long), but drifts could be an issue as winds are expected to linger near 20-25 mph during this time. It doesn’t matter as inoperable conditions (thick clouds/fog, ice and high humidity) will plague the summit through the night. In addition, the trough is expected to leave all of the mid/low-level moisture in the area as it departs, which will keep the inversion from rebuilding through at least the weekend. Actually, models expect some of this residual moisture to shift off toward the east and return back over the summit with the low-level trades on Monday night. Whatever the case, periodic fog, ice and high humidity will probably continue to plague the summit through Monday night; the odds on snow/precipitation will subside significantly after tonight, but there is still an outside chance for isolated afternoon convection through Monday.

The summit road is currently closed to the public. For further public road conditions and snow report messages, call (808) 935-6268.