By Stephanie Salazar A planned 13,000 acre Energy Farm in the Ka‘ū District of Hawai‘i Island will soon help the state reach its 70 percent clean energy goals. Hawaiian Electric Company and ‘Āina Koa Pono announced a historic biofuels agreement at a press conference on Oahu on Friday.   ‘Āina Koa Pono has been selected as the […] 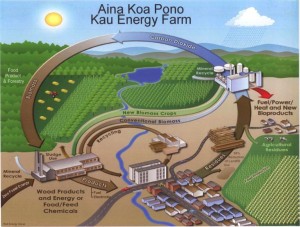 A planned 13,000 acre Energy Farm in the Ka‘ū District of Hawai‘i Island will soon help the state reach its 70 percent clean energy goals.

Hawaiian Electric Company and ‘Āina Koa Pono announced a historic biofuels agreement at a press conference on Oahu on Friday.

‘Āina Koa Pono has been selected as the recipient of a sustainable biofuels contract  from HECO. By early 2013 the Ka‘ū Energy Farm will produce biofuels that will contribute to help increase energy independence, stabilize energy prices, help revitalize a fading agriculture industry and generate hundreds of much-needed jobs for the Ka‘ū community, which was hit hard by the economic recession.

‘Āina Koa Pono is a Hawai’i-based company co-founded by local business developers Dr.Melvin H. Chiogioji and Kenton Eldridge. The company is dedicated to the development and implementation of renewable energy solutions using innovative and proven technologies.

‘Āina Koa Pono estimates it will create a minimum of 300 construction jobs over the first two years and ultimately more than 100 permanent operation and farming jobs. $320 million will be invested in the Ka‘ū Energy Farm, to cover the costs of building a cutting-edge processing facility as well as planting and harvesting biofeedstocks like sweet sorghum and eucalyptus.

The Ka‘ū Energy Farm will be located on private land under long-term lease agreements with the Olson Trust and the Mallick family.

According to a media release detailing the contract:

“This is the first contract awarded as a result of our call in April 2010 for locally grown and processed biofuels to be used in our power plants on Hawaii Island, Oahu and in Maui County,” said Robbie Alm, Hawaiian Electric executive vice president.

“The team at Aina Koa Pono submitted an excellent proposal and was prepared to negotiate with the best interests of the State and Hawaii Island at heart.”

Alm said the contract is an important step in reaching Hawaii’s clean energy goal of 70 percent of electricity and transportation energy from clean sources by 2030. The project complements Hawaiian Electric’s plans for adding significant amounts of renewable energy from other sources, including solar, wind, garbage-to-energy, biomass, geothermal, ocean and others. Under the AKP contract, the utility will:

• Signal to landowners and agricultural interests that Hawaiian Electric companies are committed to using local fuels and are signing contracts that create a workable business model for agricultural energy crops to emerge in Hawaii.

• Because liquid fuels are transportable, create a renewable fuel supply for firm power that can be used anywhere in Hawaii.

“This contract moves us forward on Governor Abercrombie’s ‘New Day’ plans for energy independence, on compliance with the aggressive Renewable Portfolio Standards now in state law and on our promises in the Hawaii Clean Energy Initiative agreement,” Alm said.

Subject to approval by the Public Utilities Commission, with input from the Consumer Advocate, the contract would initiate an innovative plan to provide economic support to Hawaii Island customers while encouraging more renewable energy statewide. It asks for the PUC to spread among customers of Hawaii Electric Light Company, Maui Electric Company and Hawaiian Electric Company the difference between the price of locally grown and produced biofuel and the fossil fuel it replaces.

“This contract provides for potential future delivery of AKP biofuels to other islands, making it reasonable that all customers join in paying the initial incremental cost as this facility gets up and running. Fossil fuel oil prices are expected to continue their erratic climb, so in time the cost of AKP biofuel is expected to be less than the cost of the oil it displaces,” Alm said.

“Hawaii Island already has the highest level of renewable energy in the state, getting more than 30% of its energy from renewable sources. Renewable energy requirements are calculated on a consolidated basis for the Hawaiian Electric companies’ service territories, so Maui and Oahu have benefited from Hawaii Island’s leadership,” Alm said.

• It is effective from and contingent upon PUC approval.

• Restricted to feedstock grown on Hawaii Island with conditional allowances for feedstocks from elsewhere in Hawaii.

• Price is fixed over term of contract with annual escalation. (Price and terms are confidential due to ongoing negotiations with other biofuel suppliers.)

• Biofuel will meet Hawaii Electric Light Company specifications and be used primarily at Keahole Power Plant in West Hawaii with flexibility for delivery to other generation stations on Hawaii Island, and Oahu and in Maui County.

• Biofuel will comply with sustainable sourcing standards developed by the Hawaiian Electric Companies in partnership with the Natural Resources Defense Council.

• The first delivery of 190,000 gallons will be for testing and air permitting.

• Hawaiian Electric companies may purchase biodiesel from any other supplier providing the AKP minimum annual purchase commitments are met.

Negotiations are also continuing with other companies for other additional local biofuel supplies.

Hawaii County Mayor Billy Kenoi sent a letter in support of the project, which was included with the press release materials:

I am pleased the County of Hawai‘i has been selected to be the home of Āina Koa Pono’s innovative biofuels processing facility. Our island currently utilizes the highest level of renewable energy in the state and is an ideal place for building our sustainable energy future because of its incredible natural resources and expansive amount of available land.

You indicated that the new Ka‘ū Energy Farm will lead the way in creating locally produced energy – to be used right here in Hawai‘i County – as well as provide both immediate and long-term jobs for the Ka‘ū District. Āina Koa Pono’s plans for growing and utilizing bio-feedstocks could help revitalize the rich agricultural industry for which our county is known.

As you plan your project, please remember it is critically important to include our community in your planning, to offer meaningful consultation with your neighbors and all other stakeholders, and to build a true community consensus in support of your proposals. Ka‘ū deserves nothing less.

I wish Āina Koa Pono the best in its partnership with the Hawaiian Electric Company and its future endeavors.