By Stephanie Salazar Mayor Sadaji Akutsu of Hilo’s Sister City – Shibukawa, Japan – visited our mayor last week. Along with trade, scientific and educational ties, Shibukawa is also home of Japan’s largest hula festival. The “Ikaho Hawaiian Festival, King Kalakaua, the Merrie Monarch,” attracts more than 4,000 participants each year and was established in 2002, with […] 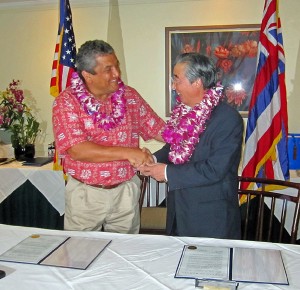 The “Ikaho Hawaiian Festival, King Kalakaua, the Merrie Monarch,” attracts more than 4,000 participants each year and was established in 2002, with the blessing of organizers of Hilo’s Merrie Monarch Hula Festival.

Since then, representatives of the Ikaho Festival attend the Merrie Monarch Festival in Hilo each year and invite the winning halau to perform at their Ikaho festival the following August.

Hawaii County Mayor Billy Kenoi and Mayor Akutsu reaffirmed the sister-city relationship in a ceremony in Hilo on Jan. 14, 2011.

Kenoi said the reaffirmation of the sister city relationship will “continue the meaningful interaction that has characterized the relationship for well over a decade. In addition to the reciprocal benefits enjoyed by our two communities, we share a larger, international benefit in setting an example of friendship and good will for the world to see and emulate.”

The mayors also committed to develop a stronger economic relationship between the Sister Cities.

“Mayor Akutsu and I held economic discussions over two nights, agreeing to joint tourism and agricultural promotions and to have our chambers of commerce explore new opportunities over the next year,” Mayor Kenoi said. “These times require more than just goodwill. We need to promote positive economic relations that benefit both sides.”