Video by David Corrigan and Baron Sekiya, Hawaii247.com | Voice of Tim Bryan For avid skateboarder Keoni Sanchez, the news that the Volcano Skate Park has been shut down is a big disappointment. “It sucks” says Sanchez. “Where are the kids supposed to skate? I mean they have a skate park just sitting there.” Sanchez, […] 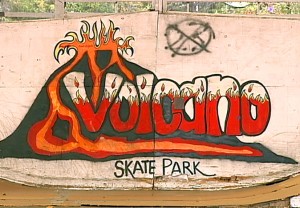 For avid skateboarder Keoni Sanchez, the news that the Volcano Skate Park has been shut down is a big disappointment.

“It sucks” says Sanchez. “Where are the kids supposed to skate? I mean they have a skate park just sitting there.”

Sanchez, who is well versed in other skate parks on the island, admits the facility is not the safest park on the island.

The series of masonite ramps were built without permits after being transported from Hilo seven years ago.

The skate park was recently repaired following damage caused by bicyclists. New hours were set for the location, but the Department of Parks and Recreation later decided to close it down for good, because of “maintenance and safety concerns”.

“The Cooper Center has the MOU on that, to be able to open the skate park to the public,” says Bob Fitzgerald, the Hawaii County Director of Parks and Recreation. “I guess the group that was taking care of it is not doing quite as good a job as they did in the past.”

“There’s an exemption for people getting hurt,” Fitzgerald added, “but not if there’s negligence in part of the care.”

Liability may not be the only factor in the sudden closing. Problems with alleged “loud music, vulgar language, drinking and drug use, and threats made to those trying to care for that facility” have also been cited by the Volcano community.

But the closure hasn’t completely stopped the unruly behavior. Evidently, someone cut their way into the closed facilty recently, slicing through the surrounding chain link fence.

A special meeting will be held on January 31st at 6 pm at the Cooper Center in order to address these controversies.

And there will be at least one skate park patron ready to voice his opinion at the gathering.

“I will be at the meeting at least to get some feedback.” said Sanchez. “At least somebody to say something positive about the place. Since we moved here there’s nothing else to do out here, but be at the park… What else do you do, you know?”