By Stephanie Salazar Governor Neil Abercrombie called for shared sacrifice in his first Hawaii State of the State address. Breaking the weeks of silence on the matter of balancing the state budget, Abercrombie presented concrete plans to tackle the $800 million shortfall through the fiscal year 2013. In his speech delivered before the house and […] 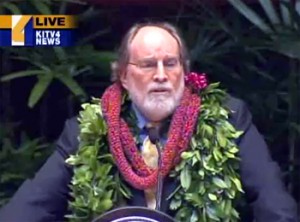 Governor Neil Abercrombie called for shared sacrifice in his first Hawaii State of the State address. Breaking the weeks of silence on the matter of balancing the state budget, Abercrombie presented concrete plans to tackle the $800 million shortfall through the fiscal year 2013.

In his speech delivered before the house and senate, and with other island officials in attendance, including Hawaii County Mayor Billy Kenoi, Abercrombie outlined the measures he hopes to enact, like tax increases and repeals to certain tax deductions.

“I will be filing a bill to modernize the terms of our employee retirement system,” Abercrombie said, “to reflect the economic and social realities of today, so that it can be sustained into the future. Absent action in this regard, the retirement system itself is in jeopardy.

“To this end, I am proposing that we end the current practice of state funded reimbursement for federal Medicare Part B benefits for Hawaii government employees. I am personally one of those recipients of this benefit from my previous service in state government. But it is a bonus paid for by taxpayers that can no longer be justified in light of our current fiscal and social crisis. I did not earn it and cannot justify asking taxpayers, public and private, to pay for it.

“I am proposing two fixes to the tax code that will increase revenues to the state. One is a repeal of the state tax deduction for state taxes—an absurdity in the tax code, the elimination of which is long overdue. This change will affect all taxpayers who itemize, so we will phase in implementation for middle-income earners to lessen the immediate effect.

“The other fix is to implement the recommendation of the Tax Review Commission to treat pension income like all other income for tax purposes, as is done when preparing federal taxes. My proposal includes a provision so that those who are most dependent on their pensions will not be taxed.

“I am proposing what is an overdue increase in the alcohol tax and will also propose a fee on soda and similar drinks. We can no longer ignore the fact that consumption of these and other such products contribute to rising public health costs. Revenues from these fees will be used to repair the public health infrastructure and also to fund prevention and education programs.

“I expect collective bargaining negotiations to be conducted in good faith and with common goals in mind—to achieve savings without disrupting service to the public, to keep state employees on the job with paychecks for their families, and to exercise creativity and long-term thinking in the bargaining process to improve the work experience and achieve a resolution of the crisis of unfunded liabilities in pension funds and runaway health costs.”

The Governor also has his eye on tourism revenue.. time shares and the HTA stand to take a hit…

“We need to ensure that our visitor industry is sustainable,” said the governor, “by bringing the impact fees paid by the increasing number of timeshare occupants into alignment with hotel room occupants who pay the transient accommodations tax.

“I will also reallocate funds from the Hawaii Tourism Authority to basic government services such as environmental protection, improvements to public facilities, and advancing culture and the arts. The amount we are spending in the name of marketing Hawaii has grown disproportionate to the amount we need to spend on Hawaii’s own infrastructure, social as well as physical. We need to reprioritize and reinvest in our Hawaii—in the things that make our islands unique.”

Abercrombie also lamented what he says was a tough decision to curtail certain social services.

“We will have to scale back on those social services for which funding no longer exists. There are some contracts entered into by the previous administration that assumed the existence of additional federal funds for Temporary Assistance for Needy Families. These unfunded contracts are for worthy programs, and we must now find new ways to support our neighbors.

“We must acknowledge, without flinching, the fact that the rising cost of health care also requires that we cut back on benefits provided to Medicaid patients in the coming years in order to sustain health coverage of any kind for eligible individuals and families. This is one of the most difficult things I have had to come to grips with as Governor, but we cannot and will not avoid it or evade the necessity of confronting the issue. I am calling on community organizations, private foundations, and all of us to work together with state agencies in helping to absorb the blows that these changes will bring.

“All told, this plan will allow us to reduce and in time eliminate our fiscal deficit and to turn around our operating deficiencies in government. This plan will speed up our recovery, result in increased revenues and create a healthy, functioning government that can serve the public good and restore confidence in ourselves.”

The Governor’s speech also contained words of hope, like investment in capital improvement projects to boost the economy. Kona was specifically mentioned.

“The New Day Work Projects will directly attack unemployment and jumpstart business activity.” Abercrombie stated. “It will provide an economic boost that will reverberate throughout the state. We will utilize the bonding power of the state, partner with willing private parties, streamline processes, and provide work that will result in paychecks for families across our islands. We will take a systematic and integrated approach to the New Day Work Projects to ensure broad distribution of economic benefits, and we will be thoughtful about the projects we select to make sure they match our long-term priorities.

“For example, we have ambitious capital improvement plans for the University of Hawaii system, including the UH West Oahu campus and the Palamanui campus in Kona, which will provide new educational opportunities for students. And our Department of Transportation is freeing a backlog of work to improve our roads, airports and harbors—a transformation of our infrastructure that will have widespread positive effects on our visitor industry and local families for decades to come.”

Pointing to education, the governor made it a point to talk about the contributions of UH-Hilo during the address.

“The University is also the state’s think tank,” said the Hawaii gov. “The Thirty-Meter Telescope on Mauna Kea, and the Beacon health information grant at UH-Hilo are two examples of the kind of practical research and innovation that will provide jobs for our people and revenue for the state. Research programs at the University will play a big part in our economic recovery by bringing external dollars into our State and building innovative industries. The University’s current research activity brings $450 million to the table. I will strongly support measures to increase that capacity.

“I also want to take a moment to note a unique element in our education system that is often overlooked but is vitally important to the future of our Hawaii. In 1896, it was made illegal to teach in the Hawaiian language. In 1986, a group of legislators and community leaders removed that ban. I was part of that group. Today, I would like to introduce founding member of Punana Leo and the first student of Native Hawaiian ancestry to receive a PhD in Hawaiian and Indigenous Language and Culture Revitalization, Dr. Kauanoe Kamanā, please stand and be recognized. Today, we have an opportunity to organize a Hawaiian language university-within-a-university as a next step. Language is a key element in ensuring that the Hawaiian culture remains strong and perseveres into the future for the benefit of all. When our young children master language, they master themselves. When they master themselves, they can achieve anything.”

And the Governor has plans for a greener Hawaii, and says he will move to ensure energy and food security in the Aloha State.

“We will also move to ensure energy and food security for Hawaii. I have spoken of and sustained my interest in an independent Hawaii Energy Authority to move the clean energy agenda. However, I am encouraged by the ideas put forward by legislators and the energy community that propose a significant restructuring of the Public Utilities Commission to move energy projects and better connect our islands with the information and transportation infrastructure that is needed to make us more self-sufficient. I look forward to working with the legislature to come up with a solution so we can move on these matters with dispatch.”

Ultimately the address caught many observers by surprise. Many pundits and analysts had not expected to hear budget specifics until March, as the new administration had indicated prior. The 2011 State of the State was an address of sobering reality, as Abercrombie’s work in the coming months will shape the success of his first year in office.

“I believe in Hawaii,” Abercrombie conculded. “I believe that you believe in Hawaii. This is the reason I ran for Governor—to have the opportunity to express everyday my confidence in all of us, no matter our background or opinion. We are Hawaii—an impossible convergence in the spirit of aloha of discovery, perseverance, unity and humanity. There is no doubt in my mind that we will overcome our current challenges.”

Mahalo to KITV for granting Big Island Video News permission to use clips from their live coverage of the State of the State address. The enite speech can be found on the KITV YouTube channel.