Video by David Corrigan | Voice of Stephanie Salazar An army plan to use landing zones on the slopes of Mauna Kea and Mauna Loa during high altitude helicopter training has drawn increased criticism since the public first became aware of the issue not too long ago. The plan was universally panned at a public […] 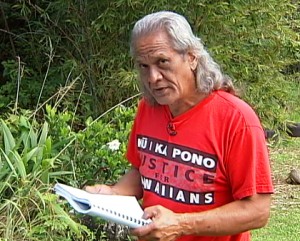 An army plan to use landing zones on the slopes of Mauna Kea and Mauna Loa during high altitude helicopter training has drawn increased criticism since the public first became aware of the issue not too long ago.

The plan was universally panned at a public hearing in Hilo a few weeks ago. The Mauna Kea Management Board also gave the plan a thumbs down, although the group is powerless to interceded in the matter.

The 30-day public comment period on the environmental assessment process has already closed, but one Mountain View resident says the army has extended him an opportunity to leave his own thoughts after he says he had trouble getting a copy of the EA document.

Hanalei “Hank” Fergerstrom says the lack of information on the plan is part of the problem.

The High Altitude Mountainous Environmental Training is called “HAMET” for short. The army says that as a part of the proposed action one of the alternatives requires that the Combat Aviation Brigade will use the same three landing zones on Mauna Kea and Mauna Loa it used to train for a previous deployment to Afghanistan in 2004.

Tha army says the landing zones provide a realistic, rugged landscape that will match the altitudes, environmental conditions such as turbulence and wind shear that the pilots will face during an upcoming deployment to Afghanistan.

But Fergostrum says there are many problems with the plan that are evident in the EA, and that an environmental impact statement is called for.

“If an emergency were to result in a spill,” Fergerstrom read from the EA, “it would be uncontainable. Due to the high permeability and percolation rates of the porous lava rock. Therefore it would be likely for a spill to percolate through the lava rock and possibly contaminate the aquifer below.”

“So,” Fergerstrom continued, looking up from the EA, “whether you are Hawaiian or not or believe in what we are doing or not, I’m sure you like to drink water, also.”

In a recent media release, the army said that there has been a number of misunderstandings about the scope of the plan. Maj. Dave Eastburn, a spokesperson for the 25th Infantry Division told the media that “during this training, you’ll only see two to four helicopters in the air at any given time. Additionally, the entire Brigade can be trained over the course of three, 15 day exercises, not including holidays or weekends”.

The army also said that the graphics published in the EA were not clear, and that maps were used to designate airspace, not land use. The army says they were designed to show that by utilizing those routes, the military will mitigate noise and any impact to the environment.

But Fergostrum says it may already be too late for the public to do anything about it. “It starts next week. So we are trying to do our best to seize the moment.”