Media release | University of Hawaii at Hilo A bilingual blessing and groundbreaking was held today for Phase I of permanent facilities to house programs and operations for the University of Hawai`i at Hilo’s Ka Haka `Ula O Ke`elikolani College of Hawaiian Language. The event took place at the project site on Nowelo Street, next […] 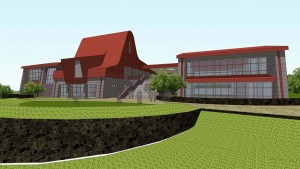 A bilingual blessing and groundbreaking was held today for Phase I of permanent facilities to house programs and operations for the University of Hawai`i at Hilo’s Ka Haka `Ula O Ke`elikolani College of Hawaiian Language. The event took place at the project site on Nowelo Street, next to the ‘Imiloa Astronomy Center of Hawai`i in the University Park of Science and Technology.

The opening ceremonies conducted in Hawaiian included a welcome, prayer, and genealogical presentation of native speakers from various parts of Hawai’i Island who assisted in Hawaiian language teaching at UH Hilo and Hawai`i Community College dating back to 1960. Mrs. Lydia Makuakane, the eldest living of those native speakers, led a procession to the groundbreaking site at the piko, or central core of the parcel, where rocks from the site’s four corners were blessed and Makuakane performed the ceremonial turning of the soil. The event concluded with remarks by dignitaries including, representatives from the University, UH System and elected officials.

“This building promises to be both functional and extraordinarily beautiful, with profound symbolic and spiritual elements,” said Chancellor Donald Straney. “It’s a building to match the quality of the programs offered by the College of Hawaiian Language.”

A building to house the University’s expanding Hawaiian Studies programs was identified as a need more than a decade prior to the department achieving collegiate status in 1998. The College’s rapid growth produced UH Hilo’s first Master’s and Ph.D. recipients as it gained national prominence as a leader in indigenous language and cultural revitalization, added new programs like linguistics and witnessed a surge in enrollment. But that growth has come at a price as operations are spread out over five locations on campus, with some faculty and staff sharing office space with up to 16 people.

The College’s quest for a permanent home took the last major step with the legislature’s approval of $28 million for construction during the 2010 session. University Relations Director Gerald De Mello said the project enjoyed widespread support, but it took a coordinated team effort to secure the funding.

“This was a major accomplishment since very few initiatives were funded this past session,” De Mello said. “Our Big Island delegation led by House Higher Education Chairman Jerry Chang in concert with his Senate counterpart Jill Tokuda really came through for us. We were also fortunate to have the strong support of UH President M.R.C. Greenwood and then-Governor Linda Lingle.”

The new, two-story structure spanning 37,000 square feet will reside on a three-acre parcel and include six classrooms, including a Performing Arts Auditorium that can be sub-divided into three spaces. Special-use rooms will include a library, curriculum and media resource room, tutorial, archive and telecom conference rooms, a computer lab, student and faculty lounges and 30 offices.

Director Kalena Silva says the new building will not only address the College’s growing pains but lay a foundation for the future.

“With this building we can expand both our graduate and undergraduate programs, which are key to taking the College to the next level,” Silva explained. “We also look forward to raising our profile on the international stage by hosting gatherings with indigenous people who look at our programs as potential models for language revitalization in their communities.”

The building has already won critical acclaim by capturing the 2010 American Institute of Architects (AIA) Honolulu Design Award in the category of “Commissioned Work to be Built.” The design by WCIT Architects of Honolulu features spectacular landscape, mountain and ocean views, and designs which reflect Native Hawaiian culture and the Big Island’s natural resources. Silva believes the building could be in line to win another award following its estimated completion at the end of 2012.

Vice Chancellor for Administrative Affairs Dr. Debra Fitzsimons said the entire University is looking forward to construction of the building, which she expects to become a signature feature of the campus when completed.

“This building is an ideal reflection of the efforts of the building design committee comprised of faculty, staff and AIA consultants who took up the challenge and succeeded in creating this architectural wonder,” Fitzsimons said.

“It’s location at the piko of the campus will be a powerful symbol that honors our host culture and Princess Ruth Ke`elikolani, after whom the College is named.”