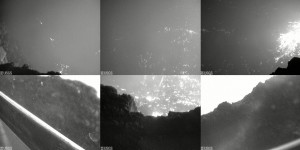 At 2:41 p.m., the scarp on the west side of the crater floor appeared to disintegrate, exposing incandescent rubble. Five minutes later, the collapse of a large block along the east crater wall produced a dust plume.

Webcam images showed that the Pu‘u ‘O‘o crater floor continued to drop through 4:26 p.m., when fume obscured the camera view. HVO Webcam images can be accessed at http://volcanoes.usgs.gov/hvo/cams/.

Coincident with the collapse in Pu‘u ‘O‘o, an earthquake swarm began along Kilauea’s middle east rift zone in the area of Maka`opuhi and Napau Craters. Tiltmeters showed east rift zone deflation, which continues as of this writing.

At 5:15 p.m., an HVO geologist flying over Kilauea’s middle east zone reported “an eruption in Napau Crater.” The eruption is now known to be located between Napau Crater and Pu‘u ‘O‘o.

Updates on the status of this eruption will be posted on HVO’s Web site at http://volcanoes.usgs.gov/hvo/activity/kilaueastatus.php.

According to Jim Kauahikaua, HVO’s Scientist-in-Charge, “This event is remarkably similar to a 1997 eruption in and near Napau Crater, which lasted less than 24 hours.”

Kilauea’s summit also continues to deflate, and the lava lake level within the Halema‘uma‘u Crater vent continues to drop, facilitating rockfalls from the vent wall.

Daily updates about Kilauea’s ongoing eruptions, recent images and videos of summit and east rift zone volcanic activity, and data about recent earthquakes are posted on the HVO Web site at http://hvo.wr.usgs.gov.