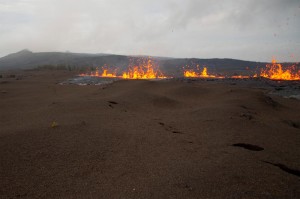 A fissure that opened on Kilauea’s east rift zone after yesterday’s collapse of the Pu’u ‘O’o crater floor continues to erupt lava. Activity along the fissure was sporadic overnight and throughout today, with periods of quiet punctuated by episodes of lava spattering up to 25 m (80 ft) high.

The fissure is located west-southwest of Pu’u ‘O’o in a remote area of Hawai’i Volcanoes National Park. Due to the ongoing volcanic activity, Park closures remain in effect in this area.

Live views of Kilauea’s fissure eruption are now possible via a Webcam installed by the USGS Hawaiian Volcano Observatory (HVO) this afternoon. The Webcam images, which are updated every five minutes, can be accessed at http://volcanoes.usgs.gov/hvo/cams/NCcam/.

Measurements made by HVO scientists today show that the Pu’u ‘O’o crater floor dropped at least 115 m (377 ft) during Saturday’s collapse. The only signs of activity within the crater today were infrequent cascades of rock fragments falling from collapse blocks. This activity is visible when Pu’u ‘O’o Webcam views, accessible at http://volcanoes.usgs.gov/hvo/cams/POcam/, are not obscured by volcanic fume.

Lava flows on the pali and coastal plain are still active, but sluggish. Whether these flows are residual lava draining through the tube system or outbreaks that continue to be fed by lava from the east rift zone vent is not yet known. Based on similar events in past years, it will take a day or two to see if the lava supply has been cut off by the uprift fissure eruption.

At Kilauea’s summit, the lava lake has receded deep within the vent in Halema’uma’u Crater and is now barely visible in HVO’s Webcam images (http://volcanoes.usgs.gov/hvo/cams/HMcam/). Small collapses of the vent walls occasionally produce dusty-brown plumes that can be seen from Park visitor overlooks.

Earthquakes are occurring at lower rates in the Napau Crater area adjacent to the new fissure eruption and beneath the summit caldera, but seismic tremor is significantly elevated in both areas. Summit deflation continues, but began to slow this afternoon. Deflation of the Pu’u ‘O’o area has slowed throughout the day.

Daily updates about Kilauea’s ongoing eruptions, recent images and videos of summit and east rift zone volcanic activity, and data about recent earthquakes are posted on the HVO Web site at http://hvo.wr.usgs.gov. Additional status reports will be posted as warranted.

The Hawaiian Volcano Observatory is one of five volcano observatories within the U.S. Geological Survey and is responsible for monitoring volcanoes and earthquakes in Hawai`i. 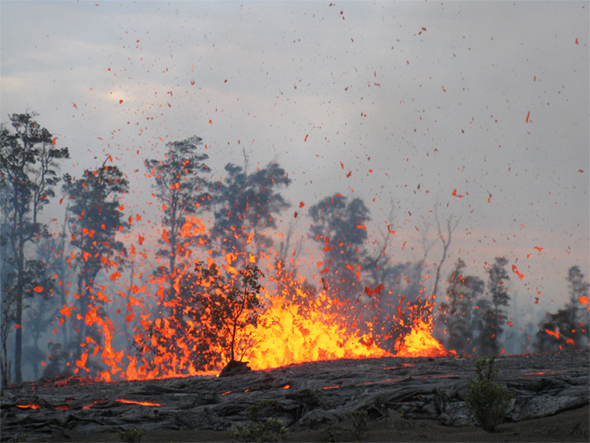 PHOTO ABOVE by USGS: The fissure between Pu‘u ‘O‘o and Napau Crater on Kilauea’s east rift zone erupts lava spatter up to 25 m (80 ft) high.