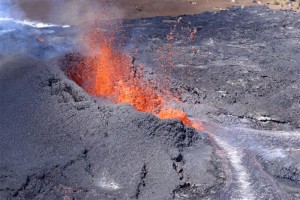 On Saturday afternoon, March 5, 2011, automatic alarms signaled increased seismic activity at Kilauea and tiltmeter records showed rapid deflation of the east rift zone. By 2:21 p.m., the floor of the Pu`u `O`o crater had begun to collapse.

In response to these dramatic changes, HVO staff were called in to work, and Hawai‘i Volcanoes National Park and Hawai‘i County Civil Defense staff were notified of the changes in the volcano’s status. As we all watched the Pu`u `O`o crater floor slowly collapse via an HVO Webcam, we continuously checked other monitoring sensors in the east rift zone and summit areas.

Soon, small earthquakes began to occur west of Pu`u `O`o. Between 3:00 and 6:00 p.m., there were more than 10 earthquakes per hour between Maka`opuhi and Napau Craters.

By 4:15 p.m., an HVO geologist was in the air, conducting aerial surveys of Kilauea’s middle east rift zone in a helicopter overflight provided by Hawaii County. With veteran pilot David Okita at the helm, they hovered near Pu`u `O`o, photographing the dust-laden gas plumes rising from the remains of the collapsing crater floor.

HVO issued the first news release describing the Pu`u `O`o crater floor collapse and subsequent fissure eruption by 6:32 p.m. But even before then, four people had already emailed askHVO to inquire about what was happening at Pu`u `O`o. Apparently, these observant individuals had the good fortune of witnessing the collapse in near real-time via HVO’s Pu`u `O`o Webcam!

Soon after the fissure eruption began, HVO was abuzz with activity. Geology crews were immediately deployed to the field for direct observation of the eruption, schedules were organized to facilitate a 24/7 watch of the monitoring network, vacations were postponed, and more. In short, the eruption resulted in an observatory-wide response, with every staff member contributing to the effort in one way or another.

Thanks to modern technology, the entire world was soon involved. Only 15 hours after the fissure opened, images of the eruption could be viewed from a Webcam that had been quickly installed by a team of HVO geologists and a software engineer with the University of Hawai‘i at Hilo’s Center for the Study of Active Volcanoes. Three days later, the team positioned a second Webcam on the opposite end of the fissure from the first camera. People were able to follow the fissure eruption as it evolved from the comfort of their homes.

In addition to Webcam images, HVO geologists format and provide captions for videos and still photos of the fissure eruption every evening after a full day of field work. HVO’s Webmaster then works through the night to post the material to the HVO website.

By March 7, after word of the fissure eruption had spread through worldwide television and print media news releases, the number of hits on the HVO Web site (hvo.wr.usgs.gov) quickly increased by nearly 10 times. Close to a terabyte of photo and video downloads happened via almost 10 million requests.

As of March 10, the Kamoamoa fissure eruption has paused and the HVO eruption update Web pages have returned to the USGS servers.

HVO staff have received numerous emails of appreciation for making the eruption quickly accessible through Webcam images, photographs, and video. This may be the first relatively short eruption in which so much near-real-time imagery was available for the world to follow.

HVO is accustomed to reacting quickly to changes in Hawaiian volcanoes. Now, with digital tools readily available and rapidly deployable, we can bring people from afar along for the ride.

At 1:42 p.m. on Saturday, March 5, seismic tremor at Kilauea abruptly increased. This was followed by the rapid deflation of Kilauea’s east rift zone near Pu`u `O`o. In response, the floor of Pu`u `O`o crater composed of lava flows emplaced over the past several months, rapidly subsided, eventually dropping about 115 m (377 ft). Just after 5:00 p.m., a fissure opened west-southwest of Pu`u `O`o within Hawaii Volcanoes National Park, and began erupting lava. The fissure continued to lengthen and erupt lava sporadically through March 6; but by the following day activity had begun to focus at the eastern and western tips of the fissure. Spatter cones up to 15 m high were constructed by low fountains that tossed lava as much as 50 m (164 ft) above the vents. The eastern vent stopped erupting on March 8, but a channelized lava flow from the western vent advanced about 2.9 km (1.8 miles) down slope before stalling on March 9. As of 10:30 p.m. on March 9, activity at the western vent had stopped, and no lava was being erupted anywhere on Kilauea’s east rift zone.

Kilauea’s summit also began to deflate with the onset of seismic tremor on March 5, and the lava lake at Kilauea’s summit, which had been about 70 m (230 ft) below the floor of Halema`uma`u, began to drop slowly. By the following day, the lava surface had receded to a depth estimated at about 220 m (722 ft) below the Halema`uma`u Crater floor. Accompanying these changes, volcanic gas emissions increased and remain elevated, resulting in high concentrations of sulfur dioxide downwind.