Video by David Corrigan | Voice of Stephanie Salazar Most of Hawaii Island was up all night preparing for a tsunami following a 8.9 earthquake in Japan that occurred at 7:46 pm Hawaii time. This is a government Furlough Friday, with schools and most offices closed, but ALL county facilities and schools are closed today […] 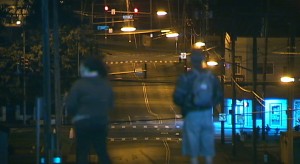 Most of Hawaii Island was up all night preparing for a tsunami following a 8.9 earthquake in Japan that occurred at 7:46 pm Hawaii time.

This is a government Furlough Friday, with schools and most offices closed, but ALL county facilities and schools are closed today on Hawaii Island.

The quake in Japan was the largest ever recorded in some 100 years and reports indicate it shook for more than 4 or five minutes.

Hawaii prayed for those in Japan and watched in live television in disbelief at the destructive waves rolling onto Japan’s coastline, reaching as far as six miles inland, with cars — even buildings — bobbing in water like toys.

Soon, Hawaii residents learned that a tsunami watch – and then a warning – was in effect because of the quake, and the first waves were set to reach Hawaii shores starting at 3 a.m. Friday.

Time for oceanside offices, such as those along Kamehameha Avenue, to move out computer equipment, file cabinets and board up windows — just like they did one year ago. It was around this time in 2010 that the same scenario played out, after an earthquake in Chile triggered a tsunami warning in Hawaii.

Sirens blared hourly as Civil Defense advised everyone to be out of coastal areas by 2 a.m.

Others who lived out of harms way filled pots and pans and bathtubs with water in case the county water system lost electricity.

In Keaukaha — a coastal community outside Hilo town — residents repeated the drill of loading up ther vehicles and taking a special evacuation route across the Hilo airport tarmac.

Mandatory evacuations for those living in the tsunami zone were underway by 2 a.m.

As soon as folks heard of the tsunami warnings they hit the road to get gasoline, resulting in long lines at gas stations, even with the $4 dollars price per gallon.

Folks tuned to Honolulu TV, local radio and of course the internet, sending tweets and face book messages and many lost cell phone use, most notably AT&T.

County department heads gathering at Civil Defence HQ in Hilo, and waited for 3 a.m. when the first waves were scheduled to hit.

Despite the possible danger, some residents could not resist he urge to watch in person, and gathered on the street to watch the event, like here at Kapiolani and Ponahawai Streets in Hilo. However, given the darkness of the early morning hours and non-destructive surge, there wasn’t much for them to see.

Damage which was said to be extensive in Kailua-Kona. We will have more from the west side of the island later today.