VIDEO: Police Officer, Firefighter of the Year honored in Hilo 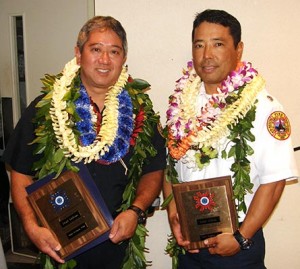 The Aloha Exchange Club of East Hawai’i recognized the Officer and Firefighter of the Year at a recent dinner ceremony in Hilo.

The two men were each given a plaque – and heard plenty of compliments – during this event at the Hilo Yacht Club.

Ishikawa is a patrol officer in the Puna District who joined the Police Department in 1986. Uchida, a 17-year veteran of the Fire Department, is in charge of Emergency Medical Services.

The Aloha Exchange Club of East Hawai’i recognized Officer Lloyd Ishikawa as “Officer of the Year” and Battalion Chief Lance Uchida as “Firefighter of the Year” in a dinner ceremony Thursday evening (March 24).

Ishikawa is a patrol officer in the Puna District who joined the Police Department in 1986. Uchida, a 17-year veteran of the Fire Department, is in charge of Emergency Medical Services. During a ceremony at the Hilo Yacht Club, each man received a plaque from the Aloha Exchange Club, a proclamation from the mayor’s office and a gift basket of donated items.

Ishikawa was honored for what Sergeant Juergen Canda called “his dedication to duty and initiative” that led him to make five bench warrant arrests, close three felony all-points bulletins, recover a stolen vehicle and locate a runaway “all within a span of one hour.”

On July 29, 2010, Officer Ishikawa responded to the Hawaiian Paradise Park subdivision to assist in locating a wanted person. He located the person and assisted in arresting him for two outstanding bench warrants. While in the subdivision, he investigated complaints about suspicious persons in the neighborhood and located three adults and a juvenile. Two of the adults were wanted for outstanding bench warrants and felony auto theft all-points bulletins and the juvenile was a reported runaway. The third adult was in possession of a stolen vehicle.

“This is a tremendous feat of police work by Puna’s most senior officer, who not only leads by example in his dedication to duty, but with the vigor and enthusiasm of a rookie,” Canda wrote in his nomination papers.

At the “Officer of the Year/Firefighter of the Year” ceremony, Deputy Police Chief Paul Ferreira said the incident that was cited in Ishikawa’s nomination is just an example of his commitment to the job. “This is what he does on a daily basis. This is how hard he works,” Ferreira said. “I’m very, very proud to be here with him tonight.”

Uchida was recognized for his oversight of the Fire Department’s Emergency Medical Services Bureau. In a write-up about his accomplishments, Fire Chief Darryl Oliveira said Uchida was promoted to Battalion Chief of the EMS Bureau on December 1, 2010.

“Like every assignment that is asked of him, Battalion Chief Uchida accepted his new assignment with the willingness and open mind to learn, the ability to lead, and the continued passion for his chosen career choice,” Oliveira wrote. “Battalion Chief Lance Uchida is one of the reasons the Hawai’i Fire Department’s Emergency Medical Services program has been so successful in the County of Hawai’i. He truly cares about what he does and always strives to make a positive impact for the people he serves.”

During the awards ceremony, Oliveira described Uchida as a “go-to person” and a role model to other firefighters. “Thank you for being there for the community in everything that you do,” he said.