Media release | Hawaii County office of the Mayor State’s First Government Operation Emissions Inventory The County of Hawai‘i has released the state’s first government operation greenhouse gas emissions inventory. Prepared by a group of county employees with the assistance of the Department of Research and Development, the study quantifies emissions created by county government […]

The County of Hawai‘i has released the state’s first government operation greenhouse gas emissions inventory. Prepared by a group of county employees with the assistance of the Department of Research and Development, the study quantifies emissions created by county government during the delivery of services to the public.

Hawai‘i County’s first carbon footprint will serve as baseline which officials can use to track the effectiveness of energy, waste and emission reduction efforts. The release of this study puts the County of Hawaii at the forefront of climate protection strategies in the state.

“You can’t manage what you don’t measure,” said Mayor Billy Kenoi. “The threats posed by our dependence on fossil fuels and climate change continue to grow, but in difficult economic times it is essential that our efforts to reduce our energy use, waste, and emissions are targeted to where they will be most cost effective. This inventory provides a roadmap for these actions and shows county government is leading by example.”

The study found that in Fiscal Year 2007-2008, providing services such as public safety, parks and recreation, water delivery, solid waste disposal and wastewater services produced 134,130 metric tons of carbon emissions or the equivalent to using 311,930 barrels of oil.

When combined, wastewater, streetlights and commuting employees accounted for the remaining 12 percent. Overall, the county spent $33 million to pay for electricity and fuel in Fiscal Year 2007-2008. This represents 7 percent of the island’s usage of electricity.

“Accounting for local government operation’s fossil fuel use and its associated financial and environmental costs are the first step to understand local government’s contribution to climate change,” said Alex Frost, coordinator of the group known as the Mayor’s Green Team. “The report provides an initial baseline to develop benchmarks and metrics to track results and help identify strategic opportunities that will save money and reduce pollution.”

The calculation of greenhouse gas emissions was conducted with ICLEI – Local Government for Sustainability USA’s Clean Air and Climate Protection software (CACP). The findings will be included in the Mayor’s Vision 20/15: Green Government Action Plan to be released in May.

This plan identifies programs and projects that can be used by county government to save money through the reduction of emissions, waste and energy usage.

Results of the current inventory and sustainability assessments conducted by Mayor’s Green Team can be downloaded at http://www.hawaiicountyrandd.net/hcrc/green-government. 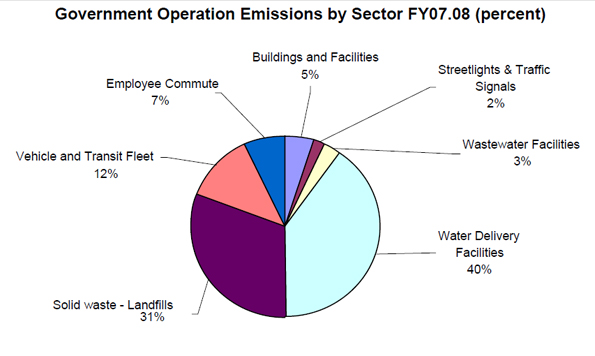 ABOVE: One of the many graphs included in the new county emissions report