Media release | Hawaii Department of Health HAWAI‘I HEALTH DEPARTMENT GRANTS PRESIDENT OBAMA’S REQUEST FOR CERTIFIED COPIES OF ‘LONG FORM’ BIRTH CERTIFICATE HONOLULU – The Hawai‘i State Health Department recently complied with a request by President Barack Obama for certified copies of his original Certificate of Live Birth, which is sometimes referred to in the […]

HONOLULU – The Hawai‘i State Health Department recently complied with a request by President Barack Obama for certified copies of his original Certificate of Live Birth, which is sometimes referred to in the media as a “long form” birth certificate.

“We hope that issuing certified copies of the original Certificate of Live Birth to President Obama will end the numerous inquiries related to his birth in Hawai‘i,” Hawai‘i Health Director Loretta Fuddy said. “I have seen the original records filed at the Department of Health and attest to the authenticity of the certified copies the department provided to the President that further prove the fact that he was born in Hawai‘i.”

On April 22, 2011, President Obama sent a letter to Director Fuddy, requesting two certified copies of his original Certificate of Live Birth. Also on that day, Judith Corley, the President’s personal attorney, made the same request in writing on behalf of the President. (Letters from President Obama and Ms. Corley are attached).

On April 25, 2011, pursuant to President Obama’s request, Director Fuddy personally witnessed the copying of the original Certificate of Live Birth and attested to the authenticity of the two copies. Dr. Alvin Onaka, the State Registrar, certified the copies.

In June 2008, President Obama released his Certification of Live Birth, which is sometimes referred to in the media as a “short form” birth certificate. Both documents are legally sufficient evidence of birth in the State of Hawai‘i, and both provide the same fundamental information: President Obama was born in Honolulu, Hawai‘i at 7:24 p.m. on August 4, 1961, to mother Stanley Ann Dunham and father Barack Hussein Obama.

In 2001, the Hawai‘i State Department of Health began computer-generating vital statistics records. Since then, its longstanding policy and practice has been to issue and provide only the computer-generated Certifications of Live Birth, and to not produce photocopies of actual records to fulfill requests for certified copies of certificates.

Director Fuddy made an exception for President Obama by issuing copies of the original birth certificate. The departmental policy to issue only computer-generated Certifications of Live Birth remains in effect for all birth records that have been computerized. Director Fuddy, in her capacity as Health Director, has the legal authority to approve the process by which copies of birth records are made.

“The exception made in this case to provide President Obama with a copy of his original Certificate of Live Birth was done according to the letter of the law,” Attorney General David Louie said. “Director Fuddy exercised her legal authority in a completely appropriate manner in this unique circumstance. We will continue to maintain the strict confidentiality requirements afforded to vital statistics records, such as birth certificates. These requirements help protect the integrity of the records, and keep us all safe from crimes, such as identity theft.”

Governor Neil Abercrombie stated: “Considering all of the investigations that have been done and the information that has been provided, no rational person can question the President’s citizenship. We have found a way – once again – to confirm what we already knew: the President was born here in Hawai‘i. State officials of both parties have verified that President Obama’s birth records show that he was born in Honolulu.

“President Obama’s mother and father were dear friends of mine, and we must respect their memory. It is an insult to the President, his parents and to the Office to suggest that he was not born in Hawai‘i. The State of Hawai‘i has done everything within our legal ability to disabuse these conspiracy theorists. We granted the President’s request for certified copies of his birth certificate so we can all move on from this unfortunate distraction and focus on the real issues affecting people today.” 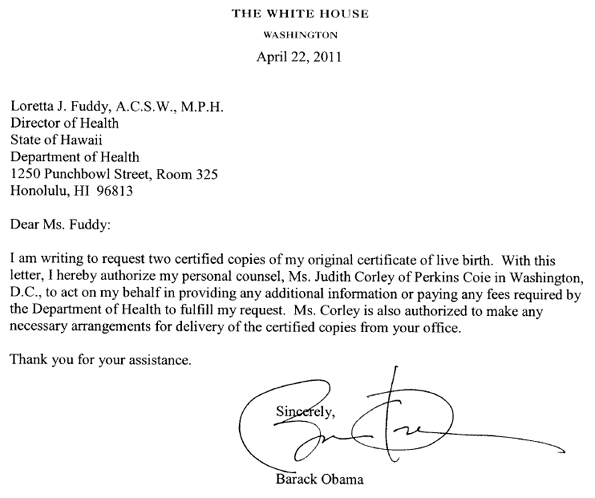