Video by David Corrigan | Voice of Stephanie Salazar As it always is for the Merrie Monarch, the Edith Kanaka’ole Stadium was packed to capacity on Wednesday night… full of hula fans who waited for hours in line outside in order to get a seat for the free exhibition. The night began with the traditional […] 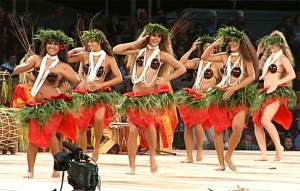 As it always is for the Merrie Monarch, the Edith Kanaka’ole Stadium was packed to capacity on Wednesday night… full of hula fans who waited for hours in line outside in order to get a seat for the free exhibition.

The night began with the traditional protocols. The entrance of the festival’s royal couple, Aaron Kaleo of Hilo and Kaleo Francisco of Pahoa, along with their court. Apule was offered by a new face to the festival… Kahu Wendell Davis.

In acknowledgement of the recent tsunami disaster inflicted upon Japan – a nation that has long embraced hula and has often sent halau to participate in the festival – a basket was passed around the audience to collect donations for the devastated country.

First up on the night’s program… the only hula performance of the evening… Hilo’s own Halau O Kekuhi, under the direction of Kumu Hula Nalani Kanaka’ole.

And this year there was something extra special about the performance… the halau was adorned in costumes of authentic kapa – the cultural cloth of old, the fabric of which is made by beating the bark of certain trees and then impressed with design. There’s only a few masters of the artform in modern times, and a few years ago they banded together to create the wardrobe for the halau, unveiled to the public for the first time Wednesday night.

The kapa makers were honored in this final mele; the display left the crowd in awe.

Next up was the Marshallese Club of the University of Hawaii-Hilo, who put on a high energy, 30 minute set.

The Marshallese Islands is an independant Micronesian nation of atolls in the middle of the Pacific Ocean. The students performed male and female dances seperatley before closing with a co-ed performance.

Then on to Tahiti…

About one hundred vahine and tane – men and women – took to the stage, shaking to the traditional Tahitian sounds in a way that whipped the audience into a frenzy…

Merahi O Tapiti is based in Keaukaha, and led by executive director Tiffany Dela Cruz. Through the traditional dances of the o’tea, the aparima, and the ahuroa, the legend of the Tahitian pearl was told.

Of course, some less traditional dancing also happened on stage, when audience members were invited up to join the troupe.

And finally, the Ho’ike closed with the intense faces of the Maori group from Aotearoa – or New Zealand – who took the stage in a slow and deliberate fashion, setting the tone for a memorable finale.

The Te Tu Mataora ro’opu performed a medley of traditional songs that ran the gamut of warlike posturing to melodic chants… and culminated in the crowd favorite… the haka.

At the end, festival Director Luana Kawelu was called to the stage and honored with gifts from the travelling Maori…

The fun isn’t over in Hilo… because for the next three evenings, the hula competition will be held.

Miss Aloha Hula will be crowned tonight, and then on Friday and Saturday, the group Kahiko and ‘Auana contests will be held. All eyes of the hula world… and perhaps the Pacific… will be on Hilo.