HONOLULU – The Hawai`i Department of Agriculture (HDOA) last week confirmed the detection of a coffee berry borer (CBB) infestation at one farm in Pahala in the Ka`u District on Hawai`i Island. Ka`u is a major coffee-growing area and surveys are currently being conducted in Ka`u to determine the extent of the infestation. CBB (Hypothenemus hampei), was first confirmed on farms in the Kona area in September 2010 and is widely established on the west side of the island. This is the first detection of a CBB infestation on a Ka`u farm.

Staff from the U.S. Department of Agriculture’s Agricultural Research Service (USDA-ARS), University of Hawai`i at Manoa, College of Tropical Agriculture and Human Resources (UH-CTAHR) and HDOA have been working with Kona coffee farmers to try to control infestations in Kona with the use of an insect-killing fungus and field sanitation practices.

CBB is a small beetle and is native to Central Africa and is also found in many coffee-growing regions of the world, including Central and South America. The beetle bores into the coffee berry to lay its eggs. The larvae feed on the coffee bean, reducing the yield and quality of the bean. Because the larvae are inside the bean, it makes it difficult to control with pesticides.

Coffee growers in Ka`u are asked to inspect their fields and report any suspected CBB to HDOA as soon as possible to HDOA’s Hilo office at (808) 974-4146. Inspectors from the Hilo USDA – Animal and Plant Health Inspection Service, Plant Protection & Quarantine (USDA-APHIS-PPQ) are also assisting HDOA in surveying for CBB in Ka`u.

Hawai`i coffee growers in non-infested areas are also encouraged to be vigilant and report any suspected CBB infestations to HDOA’s Plant Pest Control Branch on O`ahu at (808) 973-9522 or e-mail: hdoa.ppc@hawaii.gov 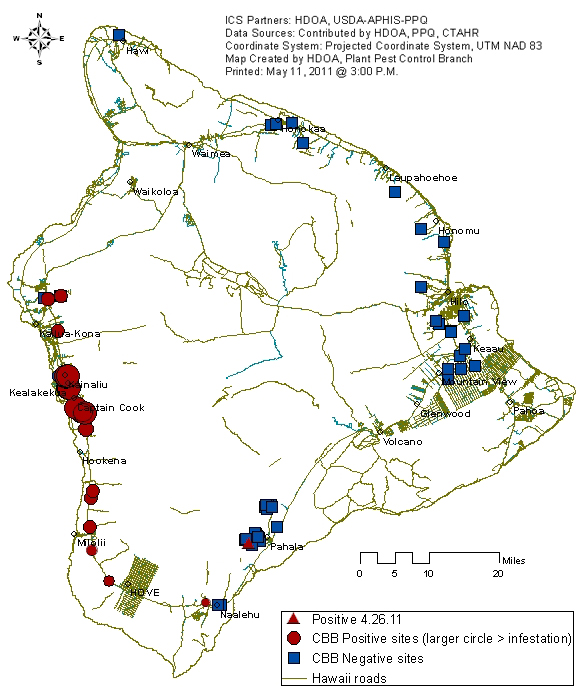