Video by David Corrigan | Voice of Stephanie Salazar 80 new doctors of pharmacy were unleashed into the world in Hilo on Saturday… an historic first for the University of Hawaii-Hilo’s College of Pharmacy. The spring commencement for the university, held at the Edith Kanaka`ole Stadium, was a milestone for the new institution. Dean John […] 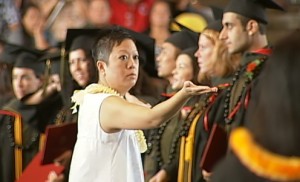 80 new doctors of pharmacy were unleashed into the world in Hilo on Saturday… an historic first for the University of Hawaii-Hilo’s College of Pharmacy.

The spring commencement for the university, held at the Edith Kanaka`ole Stadium, was a milestone for the new institution.

Dean John Pezzuto, who has spent 30 years in academic pharmacy, worked hard to lead the college to this point… and soaked in the gratifying moment along with the pioneering class of 2011.

The first student to receive her doctorate: Tehane Ornellas from Kula, Maui.

A cancer survivor, Ornellas completed the rigorous four-year professional program despite having to undergo several bouts of chemotherapy.

Ornellas was chosen by her peers for her endurance and inspiration. From a UH-Hilo media release:

Class president Jessica Toyama said Ornellas is an inspiration to her classmates.

“We all recognized that walking on stage to receive the first diploma was going to go down in history, so we had a vote who we thought should go first,” Toyama said. “I’m so happy Tehane received the most nominations because it’s a way for us to recognize her contribution to our class as a whole.”

The honor was announced Thursday, May 12, at a graduation luncheon at Hilo Yacht Club. The event kicked off a three-day celebration of the inaugural class graduating from the only college of pharmacy in the Pacific region.

Other noteworthy graduates include Cherie Chu, from Kaneohe, Oahu, who was given the Mylan Excellene in Pharmacy Award for academic achievement, professional motivation and a demonstrated ability to communicate drug information.

The pharmacy students were the last of the 607 candidates for various degrees and/or certificates to get awarded, and afterwards they joined all the university’s graduates in joyous celebration.

It has been a big month for the UH College of Pharmacy. The design phase for a $66 million dollar state-of-the art building to replace these temporary trailers was finished.

And just a few days ago, a new Ph.D. program in pharmaceutical sciences was announced.

The Western Association of Schools and Colleges, which is responsible for evaluating and accrediting colleges and universities in the western part of the United States, has approved the newly formed Ph.D. program. “We are pleased our Pharm.D. program has come to fruition with the graduation of the inaugural class, and excited that we are now able to offer another advanced degree option,” said Dr. Anthony D. Wright, director-designate of the Ph.D. program and associate professor of pharmaceutical sciences, in a media release. “In addition to pharmacy, this program should draw interest from people in many fields, such as environmental sciences, biology and chemistry, because we can offer the chance to develop dedicated research in the burgeoning area of natural products.” 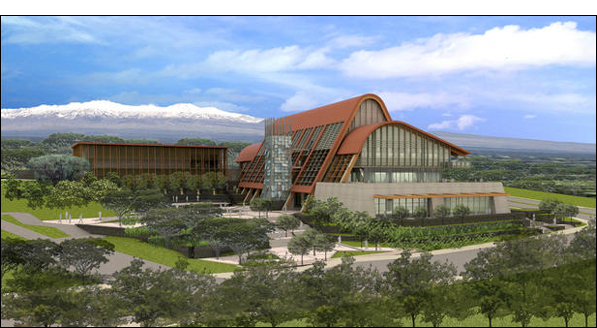 ABOVE: Design for the new UH-Hilo College of Pharmacy building, courtesy UH-Hilo and supplied by WCIT Architecture of Honolulu