Video by David Corrigan | Voice of Stephanie Salazar It was a long day for the Hawaii County Council on Wednesday, as the local lawmakers tried to settle on an operating budget for the coming fiscal year. The West Hawaii Golf Subsidy was a casualty of the council’s massive cuts to Mayor Billy Kenoi’s $367,294,364 […] 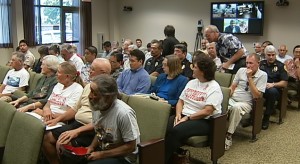 It was a long day for the Hawaii County Council on Wednesday, as the local lawmakers tried to settle on an operating budget for the coming fiscal year.

The West Hawaii Golf Subsidy was a casualty of the council’s massive cuts to Mayor Billy Kenoi’s $367,294,364 budget proposal, but the subsidy for the Hilo municipal golf course was spared. The funding for the Hawaii County Band was also left untouched. Council members decided to raid the open space land fund, and even made the bold choice to cut another 10% from all county departments, across the board, and to apply the savings towards one specific payment.

That payment is the $20.1 million gasB number 45. The gasB – or Government Accounting Standards Board – is a second health-related payment that is designed to pre-fund future obligations the county has incurred to fund retirement health care in the future.

For the past three years, the County of Hawaii has made full payment under GASB 45, but this year the administration planned to skip the payment until the next fiscal year. Some council members thought that decision put a burden on next year’s budget process that would be too heavy to carry. The lawmakers scrambled to put a dent in the $20 million payment with a number of amendments to the mayor’s plan.

Those amendments promised to be tough budget reductions, and council plans to find that money through additional cuts to county services were met with opposition from members of the community.

Further complicating matters: a vote the day before that would have raised revenue for the county by implementing a $1 fare to ride the Hele-On bus failed to pass on second and final reading. The council would have to look elsewhere for the hundreds of thousands of dollars that would have been generated.

The largest groups voicing their disapproval during public testimony: musicians and supporters of the Hawaii County Band, who once again found their beloved institution the target of a money saving slash.

Even former Mayor Harry Kim implored the council to continue government support of the band, saying it was an integral part of Hawaii Island culture.

After hours of public testimony to start the day, Mayor Billy Kenoi appeared before the council. With a room full of county staff and directors behind him, Kenoi defended the plan put forward by the administration.

After a lunch break, it was time to get down to business. Right away, the council made it clear that nothing would be off limits. Kona councilman Angel Pilago started things off by explaining a recent adjustment to grants to non-profits, down over a million dollars.

Get
the Flash Player
to see this player.

Council Chair Dominic Yagong, in search of latitude from his fellow councilmembers, decided to take amendments out of order so they could tackle the big cuts first.

With the council appearing to be split on the decision, Council Chair Yagong offered an amendment to Ikeda’s idea, asking for a $1 million reduction instead of the $2 million. The new amendment passed.

Next, it was on to Yagong’s proposed cuts; two massive swipes at the mayor’s plan, totalling over $8 million, with all the savings going to gasB 45.

The council first voted to take the over $2,777,000 in savings from the recent HGEA collective bargaining agreement out of the Budget Stabilization Fund to help pay the retirement health care cost. Administration officials warned that the new HGEA contract has not been ratified.

Yagong’s second plan was a new approach. Unlike last year, when he went line by line looking for suitable cuts to county government expenses, this year Yagong proposed a broad, $5,600,000 decrease to all departments across the board – essentially cutting another 10% out of the already pinched county government.

The proposal sparked a long debate. Mayor Kenoi even took a seat in the audience to see how the vote would turn out. The amendment was passed.

With nearly $10 million already cut from the budget to go towards gasB, the council turned its attention to some of the samller, passionate amendments on the agenda.

Councilman Pete Hoffmann, himself formerly an avid golfer, set his sights on the $315 thousand dollar subsidy for the Hilo Municipal Golf Course.

With all the cuts being made, it was surprising to see one department get more money… but that was exactly what happened to County Research and Development, who found another $225,000 headed in their direction, mainly for the implementation of a recently approved county agriculture development plan, according to Councilman Pete Hoffmann.

Council Chair Yagong appeared to be happy with the roughly $10 million being put towards gasB, and urged the council members to consider withdrawing other amendments calling for additional, smaller operating expense cuts.

The County Council will look to approve the amended budget on second and final reading at its June 1st meeting.

If the mayor chooses to veto the council’s budget, the council will have to come up with 6 votes to overturn the veto, far from a sure thing in this rocky budget cycle.