Laupahoehoe, Hawaii– The Draft Environmental Assessment has been published for the Hawaii Experimental Tropical Forest Laupahoehoe Construction Project. The project is being proposed by an arm of the United States Department of Agriculture – Forest Service. The full pdf can be found here: http://oeqc.doh.hawaii.gov/Shared%20Documents/EA_and_EIS_Online_Library/Hawaii/2010s/2011-07-08-DEA-Hawaii-Experimental-Tropical-Forest-Laupahoehoe-Construction.pdf According to the summary section at the beginning of the draft […] 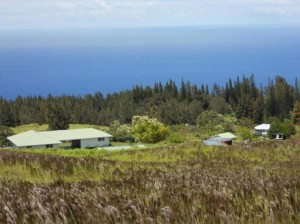 The project is being proposed by an arm of the United States Department of Agriculture – Forest Service.

The full pdf can be found here: http://oeqc.doh.hawaii.gov/Shared%20Documents/EA_and_EIS_Online_Library/Hawaii/2010s/2011-07-08-DEA-Hawaii-Experimental-Tropical-Forest-Laupahoehoe-Construction.pdf

According to the summary section at the beginning of the draft EA:

The USDA Forest Service, Pacific Southwest Research Station (PSW) in Hilo, Institute of Pacific Islands Forestry, proposes to construct at Laupahoehoe, Hawai`i, a state-of-the-art, environmentally sensitive research and education facility that would support the vision and objectives of the recently established (2002) Laupahoehoe Unit of the Hawai`i Experimental Tropical Forest (HETF). The facility would be located both on State of Hawai`i lands leased by PSW and on federal lands recently acquired by PSW. The project would provide bunkhouse facilities to accommodate up to 20 visiting scientists or students, classroom space, storage areas, restrooms, and housing for an on-site caretaker. Two action alternatives developed through project scoping and the no action alternative are evaluated in this environmental assessment (EA)

The proposed action (Alternative 3) includes renovation of existing structures on federal land to create sleeping quarters for up to 10 persons, covered outdoor classroom space, storage, and potential on-site caretaker quarters. New structures on the recently acquired federal lands would include a bunkhouse with accommodations for 10 persons, restrooms for visitors and parking for up to 20 vehicles. This site would serve as the research and education headquarters and will be called “the Laupahoehoe Administrative Site (LAS) in this document. New construction occupying 3 acres at the 20 acre leased site on State of Hawai`i lands would include a two-stall vault toilet comfort station, a covered pavilion and parking area for 10 vehicles. This site would be used primarily as a staging area for research and educational trips into the Laupahoehoe Wet Forest Unit of the HETF, and will be called the “Laupahoehoe Field Education Site (LFES)” in this document. No electrical utility connections are proposed at either site. Power for the facilities at the LAS would be generated by a photo-voltaic array with battery storage and generator back up. The facilities proposed for the LFES would not use electrical power.

This environmental analysis is being conducted in accordance with the National Environmental Policy Act (NEPA) and Chapter 343 of the Hawai`i Revised Statutes (HRS). Implementation of mitigation measures would result in little to no impacts to wildlife or State-listed species and no adverse effects to federally listed species that are known to or may occur in and near the project area. No cultural or historical properties were identified within the project area, thus no impacts are expected. Additionally, this project would be in compliance with all county building regulations and would implement mitigation measures and best management practices related to soils and water to further reduce the potential for any environmental impacts.

Background
In 1992, the Hawai`i Tropical Forest Recovery Act authorized the establishment of the Hawai`i Experimental Tropical Forest (HETF) to serve as a center for long-term research and a focal point for developing and transferring knowledge and expertise for the management of tropical forests. In 2007, the HETF was formally established. Objectives for the HETF are to: (1) provide lands for conducting research that serves as a basis for the restoration, conservation, and management of forests in Hawai`i and across tropical areas served by the Pacific Southwest Research Station; (2) provide education facilities for the general public and University and Forest Service staffs; and (3) contribute to local, regional, and global long-term environmental monitoring data sets.
The vision of the HETF is a research, demonstration, and educational forest focusing on ecological, economical, and cultural values important to all people of Hawai`i. The experimental forest will provide research opportunities for scientists, as well as learning opportunities for school children who are the future generations of landowners, land managers, and scientists in Hawai`i.
The HETF, established on State of Hawai`i land, on the Island of Hawai`i is currently divided into two units: the Laupahoehoe Wet Forest Unit and the Pu’u Wa’awa’a Dry Forest Unit. The USDA Forest Service, Pacific Southwest Research Station (PSW) in Hilo, Institute of Pacific Islands Forestry works with the State of Hawai`i in the management of the experimental forest. The research and education center facility near the Laupahoehoe Wet Forest Unit proposed in this document supports the vision and helps meet objectives of the HETF. For more information related to the establishment and vision of the HETF see: http://www.hetf.us/.

Purpose and Need for Action
The LAS and the LFES will provide facilities that will enhance the ability of the HETF to meet its full potential for research, education, and demonstration. The setting of the HETF provides a globally unique opportunity for researchers to study ecological gradients from the agricultural zone at low elevations through eight life-zones to an alpine environment at nearly 14,000 feet above sea level. The proposed LAS bunkhouse facilities will provide a research and education base camp for visiting scientists, educators and students close to the HETF. This conveniently located space to meet, study, and teach will bring researchers, educators, students, and others together and encourage the exchange of information and ideas among local residents interested in the HETF. The project will provide facilities that will support HETF research, demonstration, and educational functions serving the entire Pacific Basin. Facilities that meet these purposes are not currently available within a practical distance of the Laupahoehoe Wet Forest Unit of the HETF.

Project Description, Location, and Property Ownership
The proposed facilities would be located in Hawai`i County, approximately 2 miles south-southwest of the town of Laupahoehoe (Figure 1: Project Location Map). In identifying parcels of land, this EA uses Hawai`i Tax Map Key parcel numbers (cited as “TMK parcel #” followed by a unique, nine-digit identifying number). Specifically, the administrative facilities would be located on U. S. Forest Service owned properties (TMK parcels #336006016, #336006082, and #336006014) and the field education site on State-owned land (TMK parcel # 336006046) under lease from the State of Hawai`i (Figure 2: Laupahoehoe Construction Project Property Location Map). All properties are identified as State Land Use Designation “Agricultural” (See Appendix A.)

Existing structures on the LAS would be renovated to meet Federal accessibility requirements, and provide temporary housing accommodations for up to 10 visiting researchers or students, outdoor classroom space and quarters suitable for a permanent on-site care taker. Facilities would be constructed on the LAS to provide temporary housing accommodations for up to another 10 visiting researchers or students, upgraded photo-voltaic arrays with associated storage batteries and backup generators, restrooms, a water catchment, storage, and distribution system, parking for 20 vehicles, and storage. See Figure 3: (Laupahoehoe Administrative Site Schematic) for the approximate locations of existing and proposed facilities. All electric power used on the LAS would be generated on-site by solar capture with a backup generator. No electrical utility connection to the site is proposed.

Facilities proposed for the LFES include an open sided shelter for outdoor classroom use, a two-stall vault toilet, storage, and parking for 10 vehicles. See Figure 4: Laupahoehoe Field Education Site Layout for the approximate location of proposed facilities. The entire developed area within the LFES is anticipated to occupy approximately 3 acres and would be enclosed with fencing to exclude feral animals and cattle from the facilities. At least 95 percent of native trees on the site will be protected and retained. There would be no use of electrical power on the LFES. No electrical utility connection to the LFES is proposed.

The installation of an invasive species vehicle wash station originally was considered for inclusion in this project to reduce the potential that invasive plant species would be transported into the HETF lodged on the undercarriages of vehicles. Alternatives were discussed at public meetings and offered in scoping response letters that included suggestions for various locations of a wash station and the idea of maintaining a number of all terrain vehicles at the HETF boundary that would only be used to access the HETF.

After further study involving the routes of invasive plant species introduction to the area via bird, pig and other animal droppings as well as wind transport, it was determined that a voluntary-use vehicle wash station would have very little added benefit in reducing this threat. Research into the wash station revealed the start up cost would be very high (likely greater than $100,000), followed by high operation and maintenance costs. A more cost effective control measure would be timely control of invasive species along the HETF access route through chemical and mechanical measures. The wash station is no longer included in this project proposal. If it is determined at a future date that a wash station will add a significant benefit in reducing this threat, another analysis would be completed. 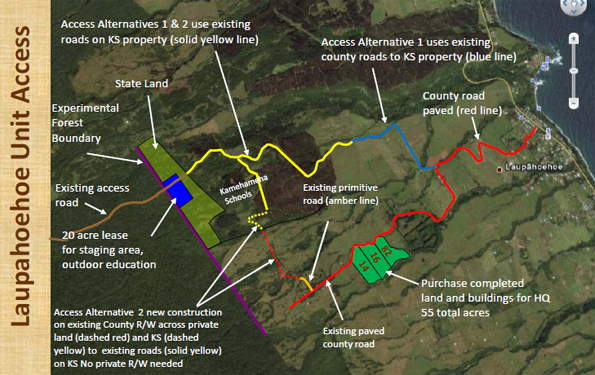 The administrative buildings would be accessed via Spencer Road and the Hawaii Experimental Tropical Forest and educational site would be accessed through the Manowaiopae Homestead Road, art of which is a county “Road in Limbo”

From the draft EA:

LAS Access
Access to the LAS would be via Spencer Road, a Hawai`i County Road that borders the site. This road is adequate for all facility needs in its current condition.

The project would implement the following upgrades or repairs to the Manowaiopae Homestead Road to facilitate safe access to the HETF and LFES.

The U. S. Forest Service would enter into a share-cost agreement with the County for the upgrades and repairs to the 1.0 mile segment of road described in this alternative. Alternative 2 would patch damaged pavement as needed and provide an initial clearing of vegetation along the roadway to provide safe lines of sight. After the initial clearing, ongoing vegetation management would revert to the County. This alternative would implement repairs to a low-water crossing of Kapili Stream in this segment. The crossing has been undercut by high flows and is periodically inundated during high flows. Proposed repairs may include cutting down through the road surface to install a culvert or other water conveyance, repairing the undercut section, and raising the road surface at the crossing. Final design will determine specific repair measures. This alternative would also include repair of the Kilau Stream bridge to bring it up to current County standards. The 65-foot long treated timber bridge has a 6 ton load limit due to scour on the bridge footings, minor deterioration in bridge stringers and decking and outdated bridge railings. The County will continue maintenance on this 1.0 mile section of road after project completion.

The next 0.47 mile segment of the road, proceeding mauka, is a single lane, paved road within Kamehameha Schools land. This alternative would provide an initial clearing of vegetation along this segment and patch or repair damaged pavement as needed. The remaining 1.08-mile road segment across the Kamehameha Schools property and the 0.19 mile segment on State of Hawai`i land are single-lane, gravel road. This alternative would provide an initial clearing of vegetation along these segments, improve drainage where necessary, and create some small cuts and fills to reduce grade steepness. These improvements should increase road stability and improve user safety. Table 1 (Proposed Road Improvements) provides a summary of length, improvements needed, and ownership of the roadway for the segments of road proposed to access the HETF and LFES under this alternative.

Some residents of the area commented on the plan, encouraging the use of Laupahoehoe Homestead Government Road as the preferable route.

A 30 day public comment period will follow the draft EA release, which will be from July 8 to August 6, 2011.

The public is invited to attend an informational meeting relating to the draft EA on Wednesday, July 20, 2011 from 6:30-8:00 PM at the Laupahoehoe Library, Humanities Room. The meeting will include an overview of the contents of the draft EA and a question/answer period.