HAWAII VOLCANOES NATIONAL PARK, Hawaii: The active Pu’u O’o vent on the east rift of Hawaii’s Kilauea volcano is just about to overflow. In a written update detailing recent observations made by the USGS Hawaiian Volcano Observatory,  scientists foretell continued activity will “overflow the western rim” sending lava out of the crater for the first […]

HAWAII VOLCANOES NATIONAL PARK, Hawaii: The active Pu’u O’o vent on the east rift of Hawaii’s Kilauea volcano is just about to overflow.

In a written update detailing recent observations made by the USGS Hawaiian Volcano Observatory,  scientists foretell continued activity will “overflow the western rim” sending lava out of the crater for the first time since the Kamoamoa fissure eruption halted lava flows towards the ocean.

Past 24 hours at the middle east rift zone vents: Uplift of the crater floor and perched lake continued; lava nearly filled the Puka Nui and MLK pits, smaller craters to the west of the main Pu`u `O`o Crater, from sources outside the perched lake (see images); the western rim of these craters is lower than the east rim of Pu`u `O`o Crater so continued activity here will overflow the western rim. The lava lake, fed continuously by a source beneath the northeast edge remained perched in the center of the doming crater floor; circulation was from northeast to southwest. The crater floor was about 18 m (59 ft) and the lava lake surface 7-8 m (23-26 ft) below the east rim of Pu`u `O`o Crater based on measurements on July 21. Through July, the crater floor was uplifted about 0.5-1 m (1.5-3 ft) per day based on several measurements.

The GPS network around Pu`u `O`o recorded long-term extension since mid-April with more rapid extension across the crater since July 3 that is not recorded by nearby receivers outside the crater consistent with the source being shallow beneath the crater floor. The tiltmeter on the north flank of Pu`u `O`o Cone recorded continued weak deflation. Seismic tremor levels were low. The most recent (preliminary) sulfur dioxide emission rate measurement was 900 tonnes/day on July 19, 2011, from all east rift zone sources.

In photos published on the HVO website, the geologists again say that “Lava is only a few meters (yards) away from overtopping the pits and flowing onto the southwest flank of Pu`u `Ō `ō.” 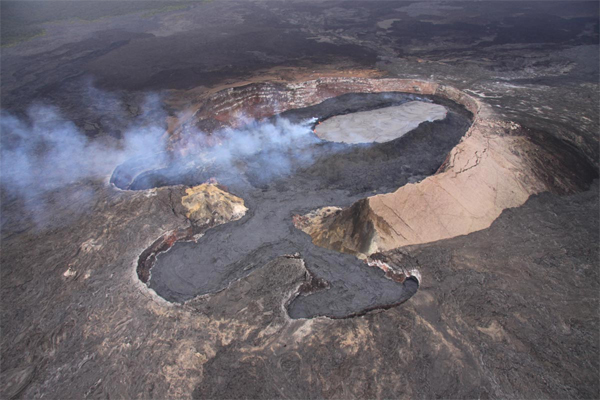 In the photo provided by HVO above, we can see how lava has filled the floor of the Puka Nui pit (lower left) and the MLK pit (lower right).

Its hard to say what will happen from one day to the next with the volcano on Hawaii Island, but perhaps we can refer to a Volcano Watch article written by HVO staff in late April, which specifically dealt with the scenario of lava overflowing Pu’u O’o.

If lava were to exit Pu`u `O`o on its east side, flows could return to the Kalapana area and again threaten houses (three occupied houses have been destroyed over the past year). If lava exits on the west side, flows will remain in the National Park and may be more accessible for visitors.

Let’s look at some recent examples of these two scenarios. In January 1997, an intrusion and fissure eruption occurred much like that in March of this year. The floor of Pu`u `O`o crater collapsed as magma drained back into the conduit—again, like the recent episode. There was a pause of 23 days, after which Pu`u `O`o slowly refilled with lava. Eventually, lava began pouring out from vents on the west flank of Pu`u `O`o.

These flows traveled south and eventually reached the sea, establishing the first of several lava tubes that carried lava away from Pu`u `O`o for the next 10 years. The flows expanded the west margin of the flow field, consuming more of the Chain of Craters Road. Since the flows were often just a short walk from the end of the road, lava-viewing was exceptional and because they flowed in the Park, there was no hazard to Kalapana residences.

In late June 2007, another intrusion and brief eruption occurred, and the floor of Pu`u `O`o collapsed as magma once again drained back into the conduit. This was followed by a pause of 10 days, after which lava started to refill Pu`u `O`o crater. On July 21, 2007, fissures opened on the east flank of Pu`u `O`o, and flows focused on the Fissure D vent. Flows were directed northeast for the first four months after which a vent wall collapse diverted them to the south.

The Fissure D vent (also called the TEB vent) remained active for three-and-a-half years and sent flows down the east side of the flow field. These flows destroyed several occupied houses and buried a significant amount of private property in Kalapana Gardens and Royal Gardens subdivisions. Because the flows were on state and private property, access to them was severely restricted, making lava viewing more limited.

The two examples above show the very different consequences for flows exiting Pu`u `O`o from the east versus the west sides. But in both cases, flows traveled south towards the ocean. There is a third possibility that flows could exit Pu`u `O`o and travel north of the rift zone. In this case, the flows could slowly migrate northeast toward communities north of Pahoa. This possibility, however, is much less likely, as Pu`u `O`o prefers to send its flows down the much steeper slopes to the south.