482 lb. marlin boated on day one of Kona billfish tournament

KAILUA-KONA, Hawaii: One day, one big fish at the grandaddy of all Kona marlin contests – the 52nd Hawaiian International Billfish Tournament. Laura Aquino of Current Events media shares this account of the first day of action: As the sun rose over Mount Hualalai, 27 teams were already gathering at Kailua Pier in excited anticipation […] 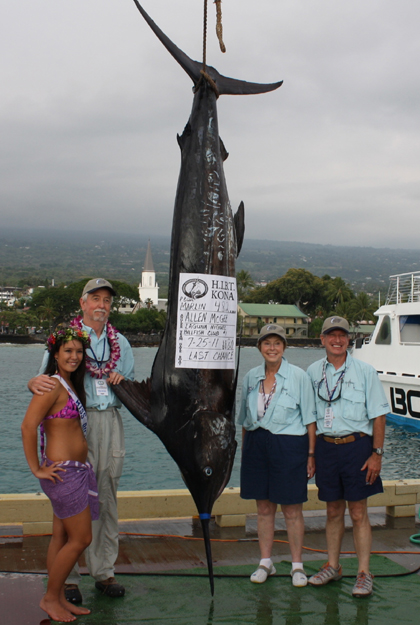 KAILUA-KONA, Hawaii: One day, one big fish at the grandaddy of all Kona marlin contests – the 52nd Hawaiian International Billfish Tournament.

Laura Aquino of Current Events media shares this account of the first day of action:

As the sun rose over Mount Hualalai, 27 teams were already gathering at Kailua Pier in excited anticipation of the first day of fishing at the 52nd annual Hawaiian International Billfish Tournament. Danny Akaka, son of noted U.S. Senator Daniel Akaka, delivered the traditional Hawaiian blessing and the teams were given the go-ahead start fishing signal at precisely 7:30 a.m. HIBT anglers were ready to go as all teams were loaded aboard the impressive fishing fleet and on the starting line with 15 minutes to spare.

The first two anglers to put points on the board this year were Susan Ward fishing with Old South Marlin Club #1 from North Carolina and Sally Kurz with Laguna Niguel Billfish Club-Col. Brooks Morris Memorial Team #1 from California. Close behind the wahine anglers was veteran HIBT angler and captain of the Kona Game Fishing Club-Taivo, Masaharu Matsushita.

“This is not my first fish here at HIBT, but it’s certainly great to be first today,” said Susan Ward, Team Old South Marlin Club #1. “And can you believe that just 50 minutes later my husband Randy tagged a Short-nose spearfish. What a wonderful morning here in Kona!”

Members of the Old South Marlin Club have been fishing for years, yet a Short-nose spearfish had managed to elude Randy Ward’s lifetime catch list. Back home in North Carolina, Ward received weekly calls from other Old South Marlin Club members taunting him about joining their Short-nose spearfish club. Well, today he joins their ranks as the newest, and very proud, club member.

Not to be outdone, Allen McGee, angler with Laguna Niguel Billfish Club-Col. Brooks Morris Memorial Team #1 boated the day’s only Pacific blue marlin, weighing in at 482 pounds. “There was quite a lot of action throughout the morning, but this girl waited until the afternoon to bite. She put up a good battle, flipping and jumping. In the end, we boated her and put good points up on the scoreboard,” said McGee. “Our team has been a three-time winner here at HIBT and we anticipate putting more points on the scoreboard by week’s end.”

At the end of day one of the 52nd HIBT, points were awarded for 18 Pacific blue marlin, one boated, a Striped marlin, 4 Short-nose spearfish and 2 boated Ahi.

“As the teams were boarding this morning, you could feel the camaraderie and competitive spirit of the anglers fill the air,” said HIBT Founder Peter Fithian. “Teams that have been coming to this tournament for a long time know what it takes to win. Our new teams sense the importance of Kona’s waters and they are here to fish and win. If today’s fishing action is an indicator, our HIBT tournament week will be a very busy one.”

HIBT rules note that billfish points are awarded for any Pacific blue marlin, Black Marlin, Striped Marlin, Short nose spearfish and Broadbill Swordfish that weigh in at 300 pounds or more. Tuna are awarded points per pound that weigh in at 100 pounds and more. Bonus points are given for weighed fish over 500 pounds, for the heaviest qualifying marlin each day and the heaviest qualifying marlin of the tournament. Qualifying tagged and released billfish are awarded valuable points computed on line weights of 80- or 50-pound test.

The Hawaiian International Billfish Tournament is underwritten by the generosity of the County of Hawaii and sponsored in part by KWXX Radio and numerous other corporate and community donors.

The 2011 HIBT is comprised of five days of tournament fishing and continues through Friday, July 29.

For more information on the Hawaiian International Billfish Tournament, including team listings, IGFA world-record rules and a daily video recap of tournament standings, log onto www.hibtfishing.com.

*Note: in the event of point ties, place standings are determined by the time the fish is boated.