Voice of Stephanie Salazar WAIMEA, Hawaii: A young Big Island killed in action in the Global War on Terror, U.S. Marine Lance Corporal Christopher L. Camero, will be remembered on Thursday, the 18th of August, as he is laid to rest at the West Hawaii Veterans Memorial Cemetery. “Hundreds, possibly thousands”, of Hawaii residents are […] 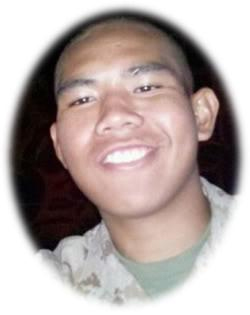 WAIMEA, Hawaii: A young Big Island killed in action in the Global War on Terror, U.S. Marine Lance Corporal Christopher L. Camero, will be remembered on Thursday, the 18th of August, as he is laid to rest at the West Hawaii Veterans Memorial Cemetery.

“Hundreds, possibly thousands”, of Hawaii residents are expected to line funeral procession route from Waimea to the cemetery in Kona, according to those organizing the massive salute.

Camero was 19 when he died on July 15th in Germany after stepping on a homemade bomb – whilst conducting combat operations in Helmand province, Afghanistan.

This message has been circulating around the internet, and arrived to our inbox from numerous sources:

Please consider joining members of our community by standing in honour of United States Marine Corps Lance Corporal Christopher L. Camero the first Big Island boy to be killed in action in the Global War on Terror.

Hundreds, possibly thousands, of your fellow Big Island citizens will be lining points along the funeral procession’s route from Waimea to the West Hawai‘i Veterans Memorial Cemetery on Thursday 18th August 2011.

The procession will depart Annunciation Catholic Church in Waimea at approximately 11:00 am and will arrive at the West Hawai‘i Veterans Cemetery at 12:00 noon.

The route will be along the mauka Māmalahoa Highway from Waimea to Waikoloa Road Junction at the A-Frame and down through Waikoloa Village, turning left on Queen Ka‘ahumanu Highway and onto the WHVMC, just past Kūki‘o.

Members of the community are invited to line the roads around the entrance to the Veterans Cemetery and leading up to it; or to choose points anywhere along the entire route where you would like to stand with United States Flags. Once the official procession passes, you can get in your own vehicle and become part of the motorcade.

The infantryman came from a military family, and as a young boy he was always saluting. His aunt, Florida Ballio, said Camero emigrated from the Philippines at about age five and was raised in Waimea, “He always goes fishing with his father whenever he gets time,” Auntie Florida said.

Chris was a 2010 graduate of Honoka‘a High School and loved the martial arts — judo and karate — football, fishing and cooking. He always wanted to be a Marine and was set to join after graduating.

Camero’s infantry battalion is stationed in the upper Gereshk Valley, just south of Sangin. The 3rd Battalion, 4th Marines had replaced a battalion landing team temporarily assigned to the area while US Marines moved into violent opium poppy-growing regions of northern Helmand. In June, Ṭālibān insurgents increased attacks against coalition forces in an apparent bid to regain lost territory.

On 6th July 2011, L-Cpl. Camero stepped on an improvised explosive device — a homemade bomb — whilst patrolling the Nahr-e-saraj district. He was transported to military hospital in Germany where his legs had to be amputated and he was placed on life support. Chris succumbed to his wounds ten days later.

A friend who attended boot camp with Camero wrote on his web site: “His lifelong goal was to become a Marine, and his childhood dream came true … I heard you were hit by an IED and I prayed for you. I will never forget you or any of the stunts we pulled.”