Video by Lynn Beittel, Visionary Video  KAILUA-KONA, Hawaii: The community gathered to lend a hand to the cherished Kahulu’u Beach Park on Saturday, part of the Kokua Kahulu’u effort organized by the Kohala Center, Hawaii County and supported by other local groups and businesses. The Wai’kua’a’ala pond, once the royal bath for Hawaiian alii, was restored […] 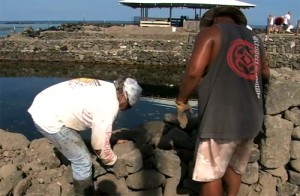 KAILUA-KONA, Hawaii: The community gathered to lend a hand to the cherished Kahulu’u Beach Park on Saturday, part of the Kokua Kahulu’u effort organized by the Kohala Center, Hawaii County and supported by other local groups and businesses.

The Wai’kua’a’ala pond, once the royal bath for Hawaiian alii, was restored by heavy lifting volunteers under the direction of Kelii Freitas, a county worker and stone mason versed in the old style. Organizers said the March 11th tsunami that battered the Kona coast presented an opportunity to refurbish the pond that had fallen under disrepair.

This past weeked’s effort comes after a lerger effort organized just a few days after the tsunami. An account can be found in the Kohala Center’s July/August Leaflet:

On March 11, 2011, the first tsunami waves hit the 4.2-acre Kahalu‘u Beach Park, transforming it into a massive lake. As the water receded over the next few days, the extent of the damage the waves had wreaked upon the park became apparent. “Fish lay flapping on the sand. Tables and signs were tossed and torn apart like toys,” says Cindi Punihaole, The Kohala Center’s (TKC) Outreach and Volunteer Coordinator.

Huge boulders were strewn across the small sandy beach, and sand and rock filled Waikua‘a‘ala, reducing it to a mere 10ʹ x 10ʹ unrecognizable pond. Debris riddled the area, and 1,000-pound concrete barricades were washed into the middle of the parking lot. The small park pavilion was undermined as the waves battered and broke through the concrete rock walls in front and to the south.

On March 14, Bob Fitzgerald, County Parks and Recreation Director, working under the direction of kupuna (Hawaiian elder) Mitchell Fujisaka, a long-time family member of Kahalu‘u, authorized emergency dredging of Waikua‘a‘ala Pond. The Kohala Center issued an island-wide call for volunteers to assist with the park clean-up. On Thursday, March 17, over 100 volunteers from Waimea, Ka‘ū, Pa‘auilo, Kohala, Waikoloa, North and South Kona—even some of our homeless neighbors at Kahalu‘u—turned out to participate in the first Kōkua Kahalu‘u Day.

“We are fortunate to be able to live in such a beautiful place with such beautiful people,” says Punihaole. “I extend a heartfelt mahalo to everyone who willingly gave of their time to help repair our beloved Kahalu‘u Beach and Bay. I especially want to thank the County workers, the volunteers from the University of the Nations, and Starbucks and KTA SuperStores, who provided breakfast pastries, coffee and tea, and lunch for all of the volunteers,” she says.

The Kohala Center organizes a number of Kokua Kahuluu days over the year.