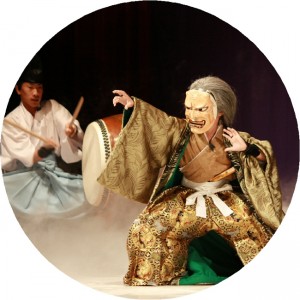 HILO, Hawaii: “A truly rare and unique” Japanese Kagura performance will be held on both sides of Hawaii Island for one time only this weekend.

The performance will be held at Honpa Hongwanji Hilo Betsuin’s Sangha Hall on Friday, August 19 from 6:00 to 8:00 p.m. Another performance will take place Sunday, August 21st at the Sheraton Keauhou Beach Resort Convention Center, from 5:30 – 7:30 p.m.

With vibrant, elaborate costumes, expressive masks and music, Kagura is a ceremonial type of dance with roots in Shinto featuring ancient legends from the mountainous region of Hiroshima Prefecture in Japan.

Believed to predate both Noh and Kabuki — the Japanese dance presentations we are more familiar with — this Kagura event is likely to be the first time Big Island residents will experience this type of historical, exciting and theatrical dance performance from the Kurisu Kagura Dan troupe of Hiroshima with members ranging from young teens to adults.

Kagura was performed during ceremonial purifying rituals, but has evolved over the span of its 1000 year history. The word, kagura, means “place of the gods” but it is written with characters which mean “music of the gods.” Today, whether it is performed in the sacred grounds of the Imperial Palace in Tokyo or for the public’s enjoyment in Hiroshima or the Big Island, it is very much a living Japanese cultural tradition enjoyed by all.

In addition to the Kurisu Kagura Dan group, the performance will feature the sister violin and piano duo “Duo Hinotsume” who learned solo and chamber music at Toho Gakuen University and have been playing together since 2000. Pianist and elder sister Yumiko won first prize at the European Music Competition, second prize at the Maryse Cheilan International Piano Competition and numerous other prizes. She now teaches at Elizabeth University of Music in Hiroshima. Violinist and younger sister Chie won third prize at the Glazunov International Competition and was selected “Excellent Youth Musician” at the competition. Since 2009, the sisters have been named Ambassadors of Miyajima and perform often in Hiroshima.

The event coincides with a cultural exchange. Organizers say “the Kurisu Kagura Dan troupe of students from Hatsukaichi City of Hiroshima Prefecture will be traveling from Japan to stage this special event in Hilo as part of a five-year anniversary celebration with sister city Kailua-Kona. Several events in Kona will be going on to mirror the events in Hiroshima, including the Kona Hiroshima Peace Festival and art exhibit. In a cultural exchange of friendship and goodwill, Kona’s Halau Kala’akeakauikawekiu will travel to Japan to perform several hula shows this month and a gallery showcase of Kona artists will be featured in an art exhibition in Hiroshima and in Kona at the Hiroshima Peace Festival on Saturday, August 20 from 12 noon to 7:00 p.m. at the Keauhou Shopping Center Courtyard. A combination of a Hawaiian Ho’olaulea and Japanese Matsuri, the Peace Festival will offer unique food including Hiroshima style okonomiyaki (Japanese crepe with meat, vegetables and noodles), displays, games, craft vendors, contests and live entertainment featuring: Herb Ohta, Jr., Kurisu Kagura Dan, Maka, Obsidian, Hula Halau Kala’akeakauikawekiu, Honokaa High School Jazz Band and Hongwanji Taiko.”

On Saturday, August 20 – between the two performances – the Kona Hiroshima Peace Festival will be held at the Keauhou Shopping Center Courtyard, from 12 noon – 7:00 p.m. Free fun for the whole family. For more information, please visit the Kona Peace Festival site at: http://www.kona-peace.com/festival.htm