Video by David Corrigan | Voice of Stephanie Salazar MAUNA KEA, Hawaii: The Department of Land and Natural Resources will soon be deciding whether or not to grant the U.S. Army’s 25th Combat Aviation Brigade the right to land Black Hawk helicopters on Mauna Kea and Mauna Loa. The Army plans to conduct High-Altitude Mountainous […] 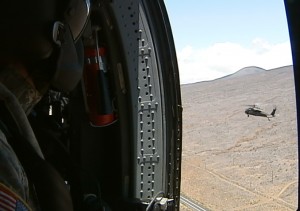 MAUNA KEA, Hawaii: The Department of Land and Natural Resources will soon be deciding whether or not to grant the U.S. Army’s 25th Combat Aviation Brigade the right to land Black Hawk helicopters on Mauna Kea and Mauna Loa.

The Army plans to conduct High-Altitude Mountainous Environment Training, or HAMET for short, in preparation for missions in regions like Afghanistan.

It is a treacherous region for combat operations, as the world learned when a Chinook helicopter was shot down in Afghanistan, killing 31 U.S. special operation troops.

For this reason, Col. Frank Tate, the 25th Infantry Division CAB Commander, says this training is imperative… and it will save lives.

At heights up to 14,000 feet, helicopters have a tough time, facing increased drag or decreased engine capability. Challenges that the two HAMET helos, the UH-60 Black Hawk and the CH-47 Chinook, are well-equipped to handle, providing the pilot is properly prepared.

If approved, this will not be the first time the army has conducted this sort of training on Mauna Kea. On four prior occasions, training has brought helicopters to land on these two monstrous volcanoes.

In November 2003, an Army Black Hawk helicopter landed about 3 and a half miles east of the designated Landing Zone, within the Mauna Kea Ice Age Natural Area Reserve and the Adze Quarry. The landing forced the army to under go additional aircrew requirements.

When the community learned that the Army was planning on conducting these missions once again in 2011, there was a unified voice of protest from environmentalists, Native Hawaiians, recreational users and astronomers… groups that rarely agree on the use of Mauna Kea.

The Army went forward with its environmental assessment, gathering data on possible impacts to noise, cultural and biological resources, and air quality.The document – prepared for the Department of the Army – foresaw a Finding of No Significant Impact. However, the EA only raised the ire of folks like Hanalei Fergerstrom, a Native Hawaiian opposed to the Army’s use of the mountain.

The army agreed the first draft of the EA was lacking, and began a public relations effort to smooth things over. Officials even invited the media up to the Pohakuloa Training Area for a special breifing, explaining their side of the story. However, the DLNR was unsatisfied, and required the Army to complete a State Environmental Assessment in order to apply for the permit needed to use the landing zones.

In July – just over a month ago – the Army organized a special demonstration at the request of the DLNR. A handful of concerned residents and community organizations joined officials above the clouds for a firsthand look at the HAMET – and Big Island Video News was there to film.

The two helicopters quickly ascended 13,000 feet, up to the three locations which were about 2 to 3 miles away from the actual summit. One helicopter demonstrated the landings, while the other helicopter observed. Our news camera was on the observation chopper.

After a smooth set of touch downs on the three landing zones on Mauna Kea, the Black Hawks taxied above the clouds to Mauna Loa; a far different terrain, comprised of old a’a lava flows.

The Army showed the observers the three landing zones that will be used on this huge, sleeping volcano.

Hank Fergerstrom was invited along for the ride… and, he was not happy with what he saw.

Now, just days away from a possible decision on the HAMET permit application, Army officials feel they have provided satisfactory answers to the community’s many questions.

Many of those questions have come from concerned Sierra Club members like Cory Hardin, who recently explained why she wasn’t on the Amry’s demonstration flight.

Hardin wonders what the Army will do if there is a crash at these inhospitable elevations.

Meanwhile, Hank Fergerstrom has his eye on the Palila Critical Habitat… where the endangered native honeycreeper finds refuge amongst healthy mamane trees.

Aside from the environmental and cultural concerns, Hardin and many others wonder about public access…

Now, in the 11th hour of planning and assessing, a few are wondering… why can’t the army conduct this training in Colorado, instead of Hawaii?

The debate points towards a larger concern weighing on the minds of some folks, like these who testified at this public hearing filmed in January.

The matter is on the agenda of the Board of Land and Natural Resources at their meeting to be held this week.