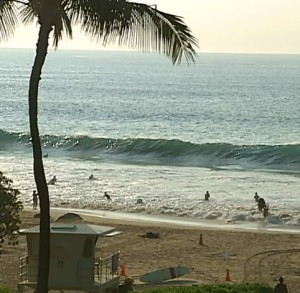 KOHALA COAST, Hawaii: An effort to locate unexploded ordnance – and dispose of it, if found – at the popular Hapuna Beach State Recreation Area is underway.

The Hawaii Department of Land and Natural Resources issued this media release:

The U.S. Army Corps of Engineers, on behalf of the Department of Land and Natural Resources is conducting surface and subsurface scanning in Hapuna Beach State Recreation Area to locate possible unexploded ordnance, most likely left over from World War II era military activity.

Scanning will take place through all of Hapuna Beach State Park past Waialea to Puako Road. The Waialea section will be done from November to December this year. The entire phase of this project will not be completed until mid-January 2012.

On Tuesday, the U.S. Army Corps of Engineers’ consultant firm Environet, Inc. completed vegetation clearing around the beach area and walking paths, and marked areas that will be scanned in the park.

Scanning for ordnance and clearances begins today in the cabin area for two weeks. This location is currently off-limits to the public, as no camping permits for the Hapuna cabins were issued by the Division of State Parks for the month of September up to October 2nd. Once work at the cabin areas is completed, scanning will continue in the remaining areas of the park.

Scanning will also take place along Hapuna Beach, starting today. Work to scan and clear the beach and parking lot will start at 7 a.m. to minimize impact to the public.

“We are not closing the beach, but we are asking the public for their cooperation to keep 200 feet away from technicians while they are actively scanning on the beach. Other areas of the beach will remain open for public use. If anything is found, the ordnance will be disposed of on-site by detonation. An evacuation to establish safety exclusion zone will be set up to allow the ordnance to be disposed of,” said William J. Aila, Jr. DLNR Chairperson. “The safety of the public is our number one concern.

Estimated time frame for completion of beach area scanning will be about six weeks, depending on whether any objects are found that may need to be disposed of. After that the rest of the park property will be scanned. This includes the large areas ranging from Queen Ka‘ahumanu highway to the Puako Road. This work will take place from November to end of January 2012.

While investigation/sweeps are being done, no evacuation is required but the public is asked to avoid the areas where Environet, Inc.’s specialists are working. Work will temporarily stop if anyone enters the 200 foot safety radius. If scanning should detect any unexploded ordnance, DLNR State Parks Division will temporarily close affected areas of the park and DLNR enforcement officers will evacuate the park while ordnance disposal takes place. This is usually accomplished in a matter of hours.

DLNR Division of State Parks has posted flyers on site to notify the public of the work being done and to ask people to stay clear of scanning technicians. Four-foot high stakes and red cones will be placed to designate areas that the public should stay out of while investigation is ongoing.
The Corps has reached an agreement with the State Historic Preservation Division (SHPD) to notify the SHPD of a potential impact to a significant cultural site if ordnance is detected in the vicinity. SHPD may take 48 hrs to document the site while the area is secured and the park will be closed until the ordnance can be disposed of by UXO experts.

Meanwhile, the Corps of Engineers and DLNR encourages communities to educate children about ordnance hazards including proper procedures to follow if they find a suspected ordnance item.

The government organizations ask that if you find any item you suspect might be ordnance – RECOGNIZE, leave the area immediately warning others in the vicinity – RETREAT, and notify local law enforcement officials – REPORT, note the location of the suspicious item, but never touch, move, or disturb the item.

DLNR says ordnance – regardless of age, or physical shape – can be dangerous.