The western lava lake in Pu`u `O`o fed a series of flows down the west flank of Pu`u `O`o through the day yesterday and until early this morning. The eastern lava lake, on the other hand, was very sluggish, but activity there began to pick up slightly just before sunset yesterday (9/20). At about 2:25 AM, activity in the crater and overflows to the west suddenly decreased, as lava broke through the upper east flank of Pu`u `O`o, bypassing the crater. The new fissure fed a channelized a’a flow that advanced rapidly downslope toward the east. The front of the flow passed beyond Webcam view within an hour. The flow’s progress will be assessed during an overflight scheduled for later today. If the flow continues to advance, it will likely head southeast, along the western edge of the Episode 58 (TEB) lava flow, toward Royal Gardens.

Seismic tremor levels were low until just before the onset of the new flank eruption, when they jumped up to a higher level. Since then, they have been slowly decaying back to their former level.

HVO staff documented the new fissure with a series of photos. Below: the fissure – or the source of the lava flow – is shown in this image. Pu’u O’o cone and crater is in the background. View is to the southwest. 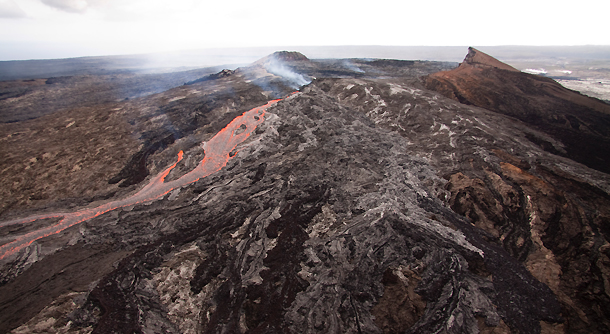 The HVO goes on to say that lava flow may pose a hazard to the Royal Gardens subdivision in the coming days.

Of coure, the subdivision has already been largely destroyed by lava flows over the past several years. According to an archived HVO Volcano Watch article from 2008:

Royal Gardens holds the dubious distinction of being the only inhabited area to be repeatedly invaded by lava flows throughout the 25-year span of the current eruption. It was the scene of the first house to be claimed by lava, back in March 1983, and it is also the site of the latest destruction–a long-abandoned house overrun in early 2007.

Anyone watching the Webcams positioned on and around Pu`u `O`o in the early morning hours of Wednesday, September 21, would have seen a marked change in the eruption. Prior to that, a lava lake in the western part of Pu`u `O`o crater was overflowing, sending lava down the west flank of Pu`u `O`o cone.

At about 2:22 a.m. on Wednesday, activity in the crater and in overflows to the west suddenly decreased as a fissure opened on the upper east flank of the Pu`u `O`o crater. This new fissure fed a channelized pahoehoe flow that advanced rapidly downslope toward the east. By mid-afternoon on Thursday, the flow, which had transitioned to `a`a, had advanced 3.7 km (2.3 mi) from the fissure, and was still moving.

A tiltmeter and a GPS instrument on the north flank of the cone started moving away from the fissure area more than a half hour before lava broke the surface, tracking the motion of magma toward the surface.

This fissure opening is very similar to the start of activity in July 2007, when a fissure opened in the same general area. In 2007, the activity localized about 2 km (1.2 mi) east of Pu`u `O`o cone and fed lava flows for the next 3.5 years.

Those of you who follow Kilauea’s volcanic activity will have noticed that, while the previous four years (since the July 2007 eruption) had been fairly steady-state, this year, we’ve already seen three shifts in eruptive activity: the Kamoamoa fissure eruption west of Pu`u `O`o in March, the flows from the western base of Pu`u `O`o cone in August, and, this week, the fissure high on the east flank of the cone.

All these changes are in response to increased pressure within Kilauea’s magma plumbing system. Prior to the 2007 eruption, pressure was very high because of an increase in magma supply rate from depth, inflating the entire volcano’s shallow plumbing system. The high pressure was manifested by uplift and spreading of the summit and rift zone areas and a high stand of lava in the Pu`u `O`o crater. The 2007 vents to the west of Pu`u `O`o relieved much of that pressure by initially feeding voluminous lava flows. The summit and rift zones quickly subsided, then subsided more slowly as the flow rates waned.

In 2010, the pattern of subsidence and contraction at the summit turned once again to uplift and extension, and the lava level in Pu`u `O`o began to rise. It is not clear what caused this inflation—it lacked the characteristic increase in volcanic carbon dioxide emissions that indicate a larger supply of magma from depth. It’s possible that the inflation was due to less volume being erupted; possibly the extremely frequent deflation-inflation (DI) cycles were enough of a disruption to restrict flow of lava from Pu`u `O`o.

The first release of the pressure building since early 2010 was the Kamoamoa fissure eruption, just west of Pu`u `O`o, in March 2011. That eruption drained Pu`u `O`o, and it took more than two weeks for lava to return. By July, the lava level was close to the rim once more. In August, the pressure was relieved for a short while by lava from the crater breaking through the cone near its base. Those seeping lava flows lasted only a couple of weeks, and the level of lava in the crater rose once more.

We don’t know how long this week’s fissure eruption will last, but it is certain that the ever-changing activity at Pu`u `O`o will keep us and all you volcano watchers intrigued and awaiting the next new phase.

A lava lake has been present within the Halema`uma`u Overlook vent over the past week, resulting in night-time glow visible from the Jaggar Museum. The lake, which is deep within the vent cavity and visible by Webcam, fluctuated in level several times over the past week in response to two deflation-inflation cycles at the summit.

Early this past week, lava within the Pu`u `O`o crater, on Kilauea’s east rift zone, rose to the crater rim, feeding several relatively short overflows to the west. At 2:20 a.m., HST, on Wednesday, September 21, a new fissure opened on the upper east flank of Pu`u `O`o cone, sending a vigorous flow outside the crater to the southeast, and causing the lava level in the crater to drop. By the afternoon of Thursday, September 22, this flow was still actively advancing and had traveled 3.7 km (2.3 miles) southeast of Pu`u `O`o. If this flow continues, it will threaten the Royal Gardens subdivision in the coming days.