One dead, one injured on Hawaii zipline tour

UPDATE: Video by Daryl Lee HONOLII, Hawaii: Fire officials confirm that one person has died and one person has been injured on a remote zipline attraction on Hawaii Island. Sources at the scene report that the fatal incident occurred at the Honolii Mountain Outpost, owned by Lava Hotline. Names of those involved in the accident […] 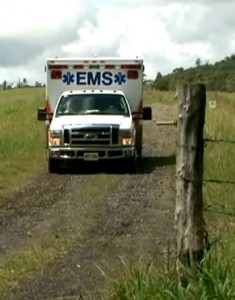 Sources at the scene report that the fatal incident occurred at the Honolii Mountain Outpost, owned by Lava Hotline. Names of those involved in the accident have not been released, but it has been confirmed that they were employees of  the company Experiential Resources Inc. , professional zipline builders.

Fire officials got a call about an accident at 9:39 a.m. at the zipline attraction, operating along Honolii Stream about 3.8 miles up from Kulana Street in Paukaa.

Noted units responded to a report of of a Zipline accident at the noted location. One male patient extricated, treated by ground unit, and transported to Hilo Medical Center by ChopperTwo in critical condition. Another male victim, found with no signs of life, extricated out by Chopper One. Investigation being conducted by HPD.

A Maui man died and an Ohio man was critically injured in a zip line accident Wednesday morning in Paukaʻa.

Both men were employed by a Maui company that builds and maintains zip lines. They had just made an adjustment to the line and were in the process of testing it.

The 36-year-old Maui man had traveled about halfway across the 2,300-foot span when a tower collapsed and he fell approximately 200 feet to his death.

The 35-year-old Ohio man, who was standing on the tower, fell about 30 feet. He was taken to Hilo Medical Center, where he was listed in critical condition with multiple internal injuries.

The name of the man who died is being withheld pending notification of his family. An autopsy has been ordered to determine his exact cause of death.

“I want to express our concern and condolences to the families of both men involved in this tragedy. Our thoughts and prayers go out to their families.”

UPDATE: Hawaii County Police have officially released the names of the two men involved in Wedensday’s zipline accident. Here is a portion of the latest media release:

A Maui man who died and an Ohio man who was critically injured in a zip line accident Wednesday morning in Pauka’a have been identified as 36-year-old Ted Callaway and 43 year old Curtis Wright, respectively.  An autopsy has been scheduled for tomorrow (September 23) to determine the exact cause of Mr. Callaway’s death.  Mr. Wright remains in critical condition at the Hilo Medical Center as is in “very unstable” condition.

In the 24 hours since the accident, loved ones have been leaving messages honoring the late Teddy Callaway on this page, through the Facebook social media comment mechanism.