Video by David Corrigan | Voice of Stephanie Salazar HILO, Hawaii: Big Island Video News was on hand for Namaste the white Bengal tiger’s birthday at the Panaewa Rainforest Zoo on Saturday…. but it was the animals in another exhibit that had the attention of a state sentaor who was also in attendance. Senator Gil Kahele sized […] 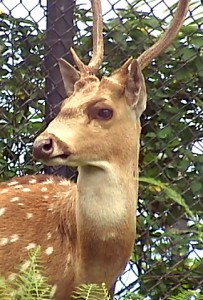 HILO, Hawaii: Big Island Video News was on hand for Namaste the white Bengal tiger’s birthday at the Panaewa Rainforest Zoo on Saturday…. but it was the animals in another exhibit that had the attention of a state sentaor who was also in attendance.

Axis deer have established populations on the islands of Lana‘i, Moloka‘i and Maui, where the indiscriminate ungulates with large appetites have devastated ag lands.

In May, after months of rumor and speculation, The Department of Land and Natural Resources confirmed sightings of the deer in areas of Kohala, Ka‘u, Kona and Mauna Kea.

The senator recently issued an editorial to media outlets vowing to stop the invasive animal from establishing a large population on the Big Island. In part, it read:

What would a population of axis deer mean for the Big Island? Coffee and macadamia nut farms have been longstanding industries for the Big Island, with our burgeoning Ka‘u coffee industry beginning to receive international attention. The demand for ono local beef from our ranches in Ka‘u, Waimea, and other parts of the Big Island has grown as people heed the call to eat local. Also, our nurseries and beautiful anthurium farms – imagine the ravaging effects a herd of axis deer could have on these industries.

As outlined in the May 28, 2011 Honolulu Star Advertiser and based on the best evidence I have available to me, I believe that axis deer may be making its way to the Big Island. Knowing the negative impacts that will occur to the environment and our local industry, I am doing everything in my power to prevent this animal from establishing itself on the Big Island.

I cannot stress how vital I believe this issue is to the health of our local economy and ecosystem. I will continue to push for awareness on this issue, knowing that with early action we can protect our home, the Big Island.

DLNR asks the Big Island residents to report any sightings of deer or any other unusual new or introduced mammal anywhere to call the Big Island Invasive Species Committee Hotline at (808) 961-3299 … Please provide your name, contact information, an estimate of how many deer, and the location where you saw the deer.