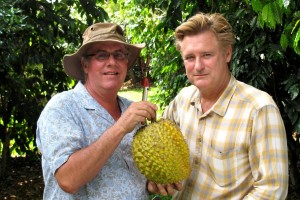 Lynn Beitell of Visionary Video, who often provides video for the Big Island Video News casts, assisted the five person Canadian crew from Eye Steel Productions in Montreal. She provided these photographs of the behind-the-scenes.

The film is said to explore the diversity of the world’s fruit, and the passions fruit ignites in the heart of fanatics.

Crew arrived late Friday, Oct. 22 and as supposed to leave on Tuesday, Oct. 25, but extended their stay until Oct. 27 because they had so much to shoot. The crew stayed at the Manago Hotel and reportedly loved the ambiance.

Also, The Keauhou Beach Resort is the new location of the 6th annual Hawai‘i Avocado Festival. The free, community event is 10 a.m.-4 p.m. Saturday, Feb. 18 and offers a wealth of activities for attendees of all ages.

Also on display and for sale will be original festival art and t-shirts.