From the Office of Hawaii Governor Neil Abercrombie:

“The Obama Administration and Governor Abercrombie share a commitment to promoting the use of locally-produced, clean renewable energy,” said Secretary Chu. “As we compete in the global marketplace for the clean energy jobs of tomorrow, we need to continue to invest in the technologies that will create jobs here in Hawai’i and ensure American companies remain competitive. I look forward to continuing and growing the strong partnership between the Department of Energy and the State of Hawai’i.”

About two dozen government and private leaders working on achieving Hawai’i’s clean energy goals participated in the roundtable discussion. Subjects ranged from operationalizing of renewable energy, to continued smart grid advancements, biofuel development, and the necessity of an inter-island cable.

“Hawai’i is a natural alternative energy test-bed due in large part to the many partnerships we enjoy,” said Senator Inouye. “The U.S. Departments of Energy and Defense are active and valued partners to assist in the rapid deployment of renewable energy technology to reduce our dependency on fossil fuels. We must have the political will to stay the course not just for us but for the next generation. It is time to take our test-bed to the next level.”

Governor Abercrombie added, “The partnership we have with the federal government is a key ingredient in reaching the goals we have as an island state. In reaching these goals, we are not only protecting ourselves from the volatility of outside fossil fuel markets, but are setting standards for the rest of country and the world in the application of clean energy technologies.”

The Hawai’i Clean Energy Initiative is a partnership between the state and the U.S. Department of Energy to implement actions to reduce Hawai’i’s dependence of fossil fuel oil by 70 percent by 2030.

Secretary Chu is in Honolulu attending the APEC leaders’ week conference. He is charged with helping implement President Obama’s ambitious agenda to invest in clean energy, reduce our dependence on foreign oil, address the global climate crisis and create millions of new jobs. He is a distinguished scientist and the co-winner of the Nobel Prize for Physics (1997). Prior to his appointment, Dr. Chu served as the director of the Lawrence Berkeley National Laboratory.

Today’s roundtable discussion fostered a stronger relationship in moving Hawai’i closer to reaching its renewable energy goals. In closing, Secretary Chu expressed great interest in the State’s current energy initiatives stating, “This is very exciting. Hawai’i is the perfect test-bed for us.” 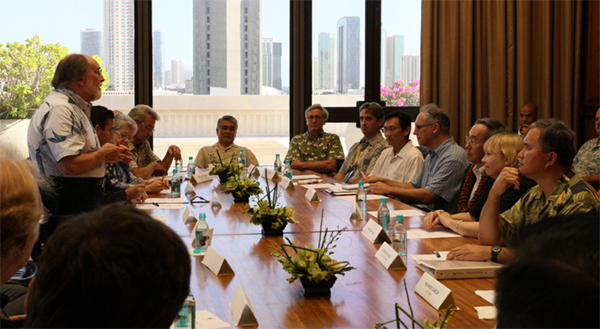