With the 100th anniversary of the Hawaiian Volcano Observatory fast approaching, many scientists at the observatory are thinking about how the current activity compares with what the first scientists at HVO were observing in the early 1900s.

Perhaps most notable is the Halema`uma`u lava lake, highly active today, just as it was a hundred years ago. But how different is the current lava lake in Halema`uma`u from the earlier lakes?

Through much of the 1800s and into the early 1900s, Halema`uma`u had an active lava lake. This was the lava lake visited and described so eloquently by Mark Twain and subsequently monitored by Frank Perret and Thomas Jaggar in the early days of HVO. During this phase of continuous activity, lava drained from Halema`uma`u, triggering explosions in 1924.

In 2008, a new vent opened in Halema`uma`u and the current eruption began. Now, a lava lake resides about 100 m (330 ft) deep within the vent and is continuously churning away.

Let’s start the comparison with the basic geometry of the vents. In the early 1900s, the lava lake was in a relatively wide crater (diameter of 400 m, or 1,300 ft), easily seen and even approached by ladder and ledges. Today, the lava lake resides in a much narrower (150 m, or 490 ft wide) pit and is rarely shallow enough for good, extended viewing from the crater’s rim.

The geometry of the lake itself is also much different. The current lava lake normally consists of a single, nearly circular body of lava, with one primary flow direction. The lava lake in the early 1900s, however, was often much more complex, with subordinate ponds, islands, and narrow channels feeding into embayments.

Lava level is another important comparison. In the early 1900s, it fluctuated over a wide range but, overall, was about 100-150 m (330-490 ft) higher than it is today. In 1919, for instance, lava spilled out of the crater and covered much of the caldera floor.

Lava level fluctuations are also common. Today we see long-term (days-to-weeks) fluctuations due to changes in the east rift zone eruption. For example, the opening of the Kamoamoa vents in March 2011 briefly drained the Halema`uma`u lava lake. In the early 1900s, the lava level also fluctuated due to activity elsewhere on the volcano.

The current lava lake activity has been accompanied by a series of small explosive events. There is no record of explosive activity within the Halema`uma`u lava lake prior to the 1924 explosions.

Gas emission is something that the current and old lava lakes share. Photos from the early 1900s show the same robust white plume that we see today, carried by the trade winds to the southwest. A visitor in the 1800s described “suffocating fumes of sulphuric acid gas.” Presumably, vog was a problem in west Hawai`i in the past, as well.

What can we learn from these comparisons? The complex geometry of the early lava lake may simply be due to its long history of activity, compared to the present lake, with decades to build up and modify the vent area. The lower lava level today can be attributed to the long-lived eruption on the east rift zone that is continuously tapping the summit magma chamber. That both the new and old lava lakes experience fluctuations correlated with rift activity reinforces the notion that Halema`uma`u’s lava lake is a sensitive pressure gauge of the summit magma chamber.

The lack of explosions in the early lake is probably due to the absence of towering, overhanging rock walls—as there are today—that could collapse into the lake. The recent explosions, we believe, are due to collapses of the vent wall impacting the lake surface and triggering violent degassing.

The emission of copious amounts of gas by lava lakes, past and present, is easy to understand. Continuously active lava lakes are sustained by a process called magmatic convection, which is driven by the persistent supply of gas-rich magma from depth.

As we approach HVO’s 100 year anniversary, Halema`uma`u reminds us that scientists have been perched on the caldera rim, observing and pondering the mysteries of Kilauea’s activity, for over a century.

Photo caption: Photo of the lava lake within the vent inset within the east wall and floor of Halema`uma`u Crater on March 3, 2011, just days before the Kamoamoa fissure eruption caused the lake level to drop much deeper and out of sight.

A lava lake was present within the Halema`uma`u Overlook vent over the past week, resulting in night-time glow that was visible from the Jaggar Museum overlook. The lake, which is about 100 m (330 ft) below the floor of Halema`uma`u and visible by Webcam, rose and fell slightly during the week in response to back-to-back deflation-inflation cycles.

Eruptive activity on Kilauea’s east rift zone was restricted to surface flows about 4.1 km (2.5 miles) east-southeast of Pu`u `O`o. These flows travel through a lava tube that is fed by the September 21 fissure on the upper east flank of the Pu`u `O`o cone. 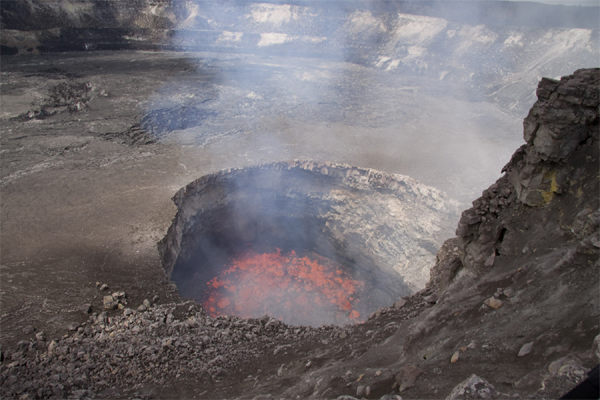