By Dave Corrigan and Tim Bryan [Video sources: KITV, APEC Hawaii 2011, Makana on YouTube, and The Whitehouse] HONOLULU, Hawaii: APEC has come to its end on Oahu… The Asia-Pacific Economic Cooperation meetings were held, as they always are, with the goal to support sustainable economic growth and prosperity in the Asia-Pacific region. Hawaii’s leaders […] 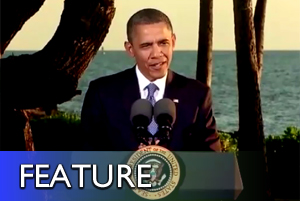 By Dave Corrigan and Tim Bryan

HONOLULU, Hawaii: APEC has come to its end on Oahu… The Asia-Pacific Economic Cooperation meetings were held, as they always are, with the goal to support sustainable economic growth and prosperity in the Asia-Pacific region.

Hawaii’s leaders considered the APEC summit as a big economic opportunity, and a chance to showcase the Aloha State on a global stage.

Of course, locals were wary. The event meant traffic jams and road closures, in order to accommodate the convergence on world leaders representing 21 member economies.

The president began Sunday press conference by thanking his home state for its hospitality. “Usually when Michelle and I and our daughters come back to visit, it’s just one President,” Obama said, “and this time we brought 21. So thank you so much for the incredible graciousness of the people of Hawaii — and their patience, because I know that traffic got tied up a little bit.”

The week say some important moments for the United States… the member economies created a new communique titled the “Honolulu Declaration” – aimed at helping the organization work “towards a seamless regional economy.”

Also, talk of a Trans-Pacific Partnership made headway, part of an effort to increase exports in a pan-Pacific free trade zone.

“As I announced yesterday,” Obama said, “the United States and our eight partners reached the broad outlines of an agreement on the Trans-Pacific Partnership. And today I’m pleased that Japan, Canada and Mexico have now expressed an interest in this effort.

This comes on the heels of our landmark trade agreements with South Korea, Panama and Colombia, which will support tens of thousands of American jobs.

And in my meeting with President Medvedev, we discussed how to move ahead with Russia’s accession to the WTO, which will also mean more exports for American manufacturers and American farmers and ranchers.”

Hanging over all the week’s talks like a cloud were the relations between the world’s two largest economies, China and the U.S.

The two countries are at odds over the value of China’s currency, which is being purposefully undervalued, according to the U.S.

China also seemed to resist the free green technology trade in the region as laid out by the Honolulu Declaration.

President Obama and President Hu of China made a carefully worded joint statement to the media after their bilateral meeting.

Obama was asked about this during the press conference. The president’s response:

Well, first of all, I also said yesterday that we welcome the peaceful rise of China. It is in America’s interests to see China succeed in lifting hundreds of millions of people out of poverty. China can be a source of stability and help to underwrite international norms and codes of conduct.

And so what we’ve done over the last two years is to try to develop a frank, consistent, open relationship and dialogue with China, and it’s yielded considerable benefits — for example, support for issues like Iran. But what I’ve also said to Chinese leadership since I came into office is that when it comes to their economic practices, there are a range of things that they have done that disadvantage not just the United States but a whole host of their trading partners and countries in the region.

The most famous example is the issue of China’s currency. Most economists estimate that the RMB is devalued by 20 to 25 percent. That means our exports to China are that much more expensive, and their imports into the United States are that much cheaper. Now, there’s been slight improvement over the last year, partly because of U.S. pressure, but it hasn’t been enough. And it’s time for them to go ahead and move towards a market-based system for their currency.

We recognize they may not be able to do it overnight, but they can do it much more quickly than they’ve done it so far. And, by the way, that would not necessarily be a bad thing for the Chinese economy, because they’ve been so focused on export-driven growth that they’ve neglected domestic consumption, building up domestic markets. It makes them much more vulnerable to shocks in the global economy. It throws the whole world economy out of balance because they’re not buying as much as they could be from other countries.

And this is not something that’s inconsistent with where Chinese leadership say they want to go. The problem is, is that you’ve got a bunch of export producers in China who like the system as it is, and making changes are difficult for them politically. I get it. But the United States and other countries, I think understandably, feel that enough is enough.

That’s not the only concern we have. Intellectual property rights and protections — companies that do business in China consistently report problems in terms of intellectual property not being protected. Now, that’s particularly important for an advanced economy like ours, where that’s one of our competitive advantages, is we’ve got great engineers, great entrepreneurs, we’re designing extraordinary new products. And if they get no protection and the next thing you know China is operating as a low-cost producer and not paying any fees or revenues to folks who invented these products, that’s a problem.

So those are two examples, but there are a number of others. These practices aren’t secret. I think everybody understands that they’ve been going on for quite some time. Sometimes, American companies are wary about bringing them up because they don’t want to be punished in terms of their ability to do business in China. But I don’t have that same concern, so I bring it up.

And in terms of enforcement, the other thing that we’ve been doing is actually trying to enforce the trade laws that are in place. We’ve brought a number of cases — one that the U.S. press may be familiar with are the cases involving U.S. tires, where we brought very aggressive actions against China and won. And as a consequence, U.S. producers are in a better position, and that means more U.S. jobs.

So I think we can benefit from trade with China. And I want certainly to continue cultivating a constructive relationship with the Chinese government, but we’re going to continue to be firm in insisting that they operate by the same rules that everybody else operates under. We don’t want them taking advantage of the United States or U.S. businesses.

For Hawaii, other APEC moments took the spotlight… like the choice for members to abandon a group photo wearing aloha shirts. An APEC custom is to pose in whatever attire typifies the culture of the host country’s region. But no aloha in 2011.

President Obama said, “I got rid of the Hawaiian shirts because I had looked at pictures of some of the previous APEC meetings and some of the garb that had appeared previously, and I thought this may be a tradition that we might want to break. I suggested to the leaders — we gave them a shirt, and if they wanted to wear the shirt, I promise you it would have been fine. But I didn’t hear a lot of complaints about us breaking precedent on that one.”

Outside all the meetings and events there were plenty of protests … but nothing grabbed the headlines like the performance put on by Makana, the musician who infiltrated an APEC dinner wearing an Occupy with Aloha shirt, as he played for the world leaders a special song.

In 2010, Mayor Billy Kenoi said he planned to invite the 21 energy ministers to Hawaii Island … but apparently no-one accepted the invite. Instead, the mayor brought the show to Oahu.

On the homefront, some local businesses got some time in the spotlight…

Sopogy, which operates a solar facility in Kona, headed by Hilo native Darren Kimura, was the the most prominently showcased.

… but for the most part, here on Hawaii Island things were quiet… Aside from a quick – and quiet – visit to the Big Island by some Russian dignitaries, it was as if nothing had happened.