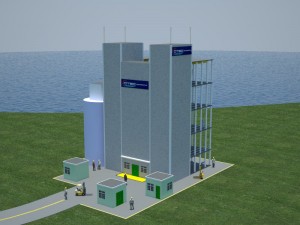 The following media release was issued by way of Hastings & Pleadwell:

Baltimore-based OTI has built its OTEC design on decades of research and innovation, combining proprietary technology with off-the-shelf components. Privately funded OTI has not relied on any government money to reach its goal and expects to be first-to-market with a commercial plant.

OTI has a term sheet and is negotiating a power purchase agreement with Hawaiian Electric Company for a 100-megawatt (MW) plant off the coast of Oʻahu, is negotiating a 25 MW plant with the Caribbean Utilities Company and is in talks with other utilities.

The demonstration plant is slated for the 870-acre Hawaiʻi Ocean Science and Technology (HOST) Park administered by NELHA. HOST Park in Kailua-Kona on Hawaiʻi Island was established for demonstration and commercialization of renewable energy, ocean science and sustainable living technologies. (www.nelha.org)

OTI was selected from four submittals to NELHA in response to its call for proposals. NELHA’s staff and Research Advisory Committee each ranked OTI’s proposal substantially higher, according to reports to the board.

Greg Barbour, NELHA’s executive director, told the NELHA board Tuesday that OTI’s proposal was “superior; comprehensive in all four areas” required in the proposal.

“We are, of course, very pleased that the NELHA board recognized the careful planning of our excellent team that has gone into our project,” said Eileen O’Rourke, OTI’s chief operating officer. Barry Cole, OTI’s Executive VP and director of technology development leads that team.

“Our main funder, The Abell Foundation, has invested substantially in advancing OTEC research over the last 11 years, proving its commitment to this exciting power source.”

The Abell Foundation also holds exclusive license to the OTEC designs developed by Sea Solar Power, a 40-year pioneer in OTEC research. OTEC uses vast solar energy stored in the upper ocean layer to vaporize ammonia, producing electricity via a turbine and generator. Deep water cools the ammonia back to liquid to be heated again in a 24/7, 365-days-a-year cycle.

ABS (formerly known as the American Bureau of Shipping), which sets standards of excellence in marine and offshore classification, has awarded OTI Approval-in-Principle for a floating renewable energy plant in both 25 MW and 100 MW models. It is ABS’s first for such an energy plant.

OTI has been funded by The Abell Foundation, a philanthropic group based in Baltimore, which also invests in promising technologies with social objectives, such as alternate energy. (www.abell.org)

OTI is set to build a pilot plant at NELHA that will produce net electricity, rather than simply test components. OTI has run successful tests of its components at other facilities and subjected its designs, test protocols, results and analysis to peer review.

The next step is to negotiate a lease agreement and terms with NELHA, which has infrastructure in place to provide a head start for full-cycle demonstration, O’Rouke said. OTI intends to finance the project with private capital and relying on no government subsidies.

“OTEC’s history is firmly rooted at NELHA. We see this as bringing it home in a sense,” she added. “There will be a lot of ‘show-and-tell’ associated with this demonstration and NELHA is an appropriate location for that.” OTEC was part of the original mission of the NELHA facility.

OTEC has global promise as a renewable energy source, but it has yet to produce commercial power. Its technical feasibility was affirmed more than 30 years ago by the U.S. Department of Energy, but low fossil fuel prices have prevented its commercial application.

“OTI’s demonstration plant at NELHA will advance NELHA’s stature as the world’s premier research and development site for OTEC,” O’Rourke said. Over the anticipated 30-year life of the demonstration plant, OTI intends to hone OTEC technology, components and operations as new or better materials and systems are discovered.

The office of Hawaii County Mayor Billy Kenoi also issued this media release in regards to the news:

NELHA’s request for information resulted in four responses, with the Board of Directors selecting OTEC International to build a one-megawatt demonstration plant that will produce electricity using the temperature difference of deep sea and surface waters. The 55-inch pipelines, worth $20 million and completed in 2006, were installed for this purpose.

“We are very pleased that OTEC has returned to its rightful place and will be further advanced right here on the Island of Hawaii,” said Mayor Kenoi. “We’ve been actively engaged in trying to attract OTEC back to Hawaii Island, and we hope this is a step in that direction.”

In September, the County of Hawaii produced and facilitated an Ocean Energy Workshop focused on bringing OTEC developers and ocean scientists together to discuss issues such as finance, environment, technology and implementation. Soon after, NELHA released a request for information (RFI) to see what developers are interested in financing and building the one-megawatt demonstration project.

“We have always believed that NELHA represents a unique asset to the Island and County of Hawaii,” said Kenoi. “We have supported NELHA since its inception in 1974 and I do not think that this opportunity would have emerged so quickly without the great partnership between County of Hawaii and NELHA.”

The county, which was also represented at an OTEC workshop on Kumejima Island, Okinawa last November, plans to continue working with NELHA to co-host ocean energy workshops, with the next one planned for mid 2012.

Mayor Kenoi is also planning to visit Kumejima, which entered into a sister city relationship with Hawaii Island at the September Ocean Energy Workshop. Kumejima officials are keenly interested in partnerships to further ocean energy and ocean science opportunities.

“We share so many similarities with Kumejima,” said Mayor Kenoi. “We are both outlying islands in an isolated region of a much larger country. We once depended on sugar cane as our economic driver but now rely on tourism. We have incredible assets at our door steps, and this positions both of us to be world leaders in aquaculture and OTEC.”