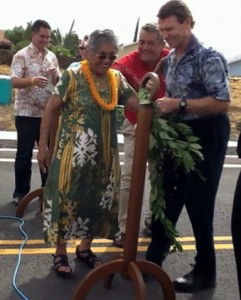 The windswept event marked a joyous point in the prolonged and litigious development, which started in 2004. The county seized control of the project from the company UniDev Hawaii in 2009, after disputes over the time line, billing, and documentation began to surface. The issue is still in litigation, and will undergo court ordered mediation in June.

Since taking over the project, the county has kept things on time and under budget. The $44 million Kamakoa Nui project will will eventually consist of about 1,200 fee-simple homes and rentals on 268 acres just north of Waikoloa Elementary School.

Construction of four single-family model homes is complete, with pre-sales of homes in the first increment scheduled to begin next month.

The county is also imposing some unique restrictions on the properties to keep them affordable. To qualify, buyers should live within a 30-mile radius of Kamakoa Nui and have an income between 70-120 percent of the area median income. Potential buyers must also live in the homes and cannot have owned a home within the last three years.

To discourage speculation, owners who re-sell their units at Kamakoa Nui within 15 years of their initial purchase will be required to share any windfall profits from the re-sales with the county. After 15 years, all restrictions on re-sales are satisfied.

From the County of Hawaii media release:

“We wanted to create a healthy community for everyone, but most of all for families with young children,” said Mayor Kenoi, who was joined by county Office of Housing Administrator Steve Arnett and his staff in celebrating the blessing of the new community. “We wanted a puuhonua, a safe haven.”

About 50 people, including government officials and private sector representatives, celebrated with the county under blue skies, brisk winds, and the island of Maui dominating the sweeping views from this community, which will feature three-bedroom single-family residences and two and three-bedroom bungalows.

About a half an hour prior to Pastor Sonny Shimaoka’s blessing of the $44 million Kamakoa Nui, the same group celebrated the opening of a new public playground a few hundred yards away from the set of four model homes which will serve as a sales area.

Homes will range from $240,000 to $325,000. Sales of the first increment of about two dozen homes should begin next month and will be marketed by Aldrich and Associates.

But Mayor Kenoi said he asked the Office of Housing staff to build the park before any homes were occupied. “This is where our kids get away from gangs and drugs,” said Mayor Kenoi.

Arnett said Kamakoa Nui was handed to the Kenoi Administration three years ago “under a dark cloud” with the project stalled, under legal scrutiny and with much higher projected home prices.

Arnett said Les Isemoto from Isemoto Contracting also cooperated by staying mobilized while the project team was reorganized. “The end result is that the project came in on time and slightly under budget.”

Mayor Kenoi said the Office of Housing has succeeded in filling many gaps in West Hawaii’s housing inventory. Along with the affordable Kamakoa Nui, the county will next week open the doors to the $12.4 million Kaloko Transitional Housing Project, with 12 units to get homeless families off the streets, and 28 units for low-income households.

“I told the people at Housing that at the end of the day, let’s see if we can make a difference at every part of the housing spectrum in West Hawai‘i,” said Mayor Kenoi. “And they delivered.”