By David Corrigan and Stephanie Salazar [Video elements courtesy Joint Astronomy Centre] MAUNA KEA, Hawaii: A revolutionary new camera that will reveal the dark side of the universe has been unveiled at the James Clerk Maxwell Telescope. A new camera – called SCUBA-2 – is far more sensitive and powerful than previous instruments and can […] 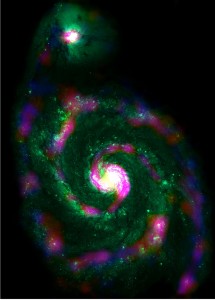 MAUNA KEA, Hawaii: A revolutionary new camera that will reveal the dark side of the universe has been unveiled at the James Clerk Maxwell Telescope.

A new camera – called SCUBA-2 – is far more sensitive and powerful than previous instruments and can map areas of the sky hundreds of times faster, according to a media release.

SCUBA-2 will provide unprecedented information on the early life of stars – normally obscured by the remains of the very dust and gas cloud that collapsed under its own gravity to form the star.

For example, this composite image (right) of the Whirlpool Galaxy, 31 million light years from Earth, also known as M51: The green image is from the Hubble Space Telescope and shows the optical wavelength. The submillimetre light detected by SCUBA-2 is shown in red and blue. SCUBA-2 detects the warm glow from dust in the dark regions along the spiral arms where new stars are being born.

One of the most incredible things about the new camera: in order to detect the extremely low energy radiation in the submillimetre region of the spectrum… The detectors inside SCUBA-2 have to be cooled to only 0.1 degree above absolute zero [-273.05°C], making the interior of SCUBA-2 the coldest place in the Universe that we know of.

“When you look up at the stars, you only see the light they are emitting in the visible part of the spectrum. Many galaxies, including our own Milky Way, contain huge amounts of cold dust that absorbs visible light and these dusty regions just look black when seen through an optical telescope. The absorbed energy is then re-radiated by the dust at longer, submillimetre, wavelengths”, explains Professor Gary Davis, Director of the JCMT. “SCUBA-2 has been designed to detect extremely low energy radiation in the submillimetre region of the spectrum. To do this, the instrument itself needs to be even colder. The detectors inside SCUBA-2 have to be cooled to only 0.1 degree above absolute zero [-273.05°C], making the interior of SCUBA-2 colder than anything in the Universe that we know of!”

The project was led by STFC’s UK Astronomy Technology Centre (UKATC) in Edinburgh in collaboration with a world-wide consortium of leading laboratories including four universities (British Columbia, Cardiff, Edinburgh and Waterloo), the US National Institute of Standards and Technology, and the Joint Astronomy Centre, which operates the James Clerk Maxwell Telescope.

Professor Ian Robson, Director of the UKATC, said: “The heart of SCUBA-2, the detector arrays, are a huge achievement; a world-first and the technological challenges in making them have been absolutely immense. It is equivalent to going from a primitive wind-on film camera that people over 50 might remember using straight to a modern digital camera all in one step. It is thanks to the ingenuity and abilities of our scientists and engineers that this immense leap in progress has been achieved.”

UK, Canadian and Dutch researchers have pioneered observations of the sky in the submillimetre wavelength range (0.4 to 1 millimetre) through their partnership on the James Clerk Maxwell Telescope. SCUBA-2’s predecessor, SCUBA (Submillimetre Common User Bolometer Array) produced many new and unexpected discoveries, from a previously unknown population of distant, dusty galaxies (known ever since as ‘SCUBA galaxies’), to the first images of cold debris discs around nearby stars, which may indicate the presence of planetary systems.

Commenting on the performance of the new instrument, Professor Wayne Holland of UKATC, and the SCUBA-2 Project Scientist, said “With SCUBA, it typically took 20 nights to image an area about the size of the full Moon. SCUBA-2 will be able to cover the same area in a couple of hours and go much deeper, allowing us to detect faint objects that have never been seen before.”

The increased mapping speed and sensitivity of SCUBA-2 make it ideal for large-scale surveys; no other instrument will be able to survey the submillimetre sky in such exquisite detail. Dr Antonio Chrysostomou, Associate Director of the JCMT said “SCUBA-2’s first task will be to carry out a series of surveys right across the heavens, mapping sites of star formation within our Galaxy, as well as planet formation around nearby stars. It will also survey our galactic neighbours and crucially, will look deep into space and sample the youngest galaxies in the Universe, which will be critical to understanding how galaxies have evolved since the Big Bang”.

The data obtained by these surveys will allow a new and precise understanding of star formation throughout the history of the universe, and complements research being carried out on other telescopes such as the Atacama Large Millimetre Array (ALMA), currently undergoing commissioning in Chile.