By David Corrigan and Stephanie Salazar [VNR courtesy NASA/AMES] MAUNA KEA, Hawaii: Today, we continue what seems to be a trend this week… Big astronomy announcements, connected in some way to Mauna Kea. For example, it was just announced that the Keck I telescope has been used to establish the mass of a planet in […] 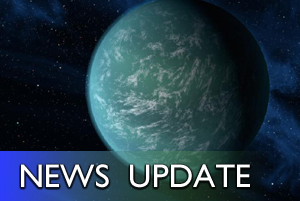 MAUNA KEA, Hawaii: Today, we continue what seems to be a trend this week…

Big astronomy announcements, connected in some way to Mauna Kea.

For example, it was just announced that the Keck I telescope has been used to establish the mass of a planet in the habitable zone around a star—that’s the region where liquid water could exist on a planet’s surface.

Kepler needs to observe a possible exoplanet three times as it passes in front of its star – or “transits” – in order to “verify a signal”. The astronomers then turn to the Keck I telescope’s powerful HIRES spectrometer to determine the mass of the exoplanet candidates.

The discovery was big news, especially among the astronomy community, as is evident in this Video news release by NASA.

The W.M. Keck Observatory also adapted their own media release about the big find:

The Keck I telescope has been used to establish the mass of a planet in the habitable zone around a star—that’s the region where liquid water could exist on a planet’s surface. The newly confirmed exoplanet, Kepler-22b, is the smallest yet found to orbit in the middle of the habitable zone of a star similar to our Sun. The exoplanet is about 2.4 times the radius of Earth. Scientists don’t yet know if Kepler-22b has a predominantly rocky, gaseous or liquid composition, but its discovery is a step closer to finding Earth-like exoplanets.

Previous research hinted at the existence of near-Earth-size planets in habitable zones, but clear confirmation has proved very difficult. Two other small planets orbiting stars smaller and cooler than our Sun recently were confirmed on the very edges of the habitable zone, with orbits more closely resembling those of Venus and Mars than that of Earth.

“This is a major milestone on the road to finding Earth’s twin,” said Douglas Hudgins, scientist for NASA’s Kepler mission, which first detected the planet.

The Kepler spacecraft was launched in March of 2009 as a NASA Discovery Mission designed to search for exoplanets. The spacecraft has an 84-megapixel camera which stares continuously at a field of 150,000 stars in the constellations Cygnus and Lyra. Kepler discovers exoplanet candidates by measuring dips in the brightness stars to search for exoplanets that cross in front of, or “transit,” the stars. The process is similar to what occurs during a solar eclipse: in that case, our Moon temporarily blocks light from our Sun, but in this case the distant planet moves across the face of the distant star and causes a much smaller decrease in the amount of light we observe from the star. Kepler requires at least three transits to verify a signal as a exoplanet. Astronomers then turn to the Keck I telescope’s powerful HIRES spectrometer to determine the mass of the exoplanet candidates.

“Fortune smiled upon us with the detection of this planet,” said William Borucki, Kepler principal investigator at NASA Ames Research Center at Moffett Field, Calif., who led the team that discovered Kepler-22b. “The first transit was captured just three days after we declared the spacecraft operationally ready. We witnessed the defining third transit over the 2010 holiday season.”

Kepler-22b and its anonymous parent star are located 600 light-years away. While the planet is more massive than Earth, its orbit of 290 days around a Sun-like star resembles that of our world. The planet’s host star belongs to the same class as our Sun, called G-type, although it is slightly smaller and cooler.

Of the 54 habitable-zone planet candidates identified by the Dr. Borucki’s team in February 2011, Kepler-22b is the first to be confirmed. The discovery of this milestone will be published in a research paper to appear in The Astrophysical Journal.

Early in its mission, the Kepler satellite discovered many large planets in small orbits, which comprised the bulk of the planets reported in the February data release. Now that the science team has had time to acquire data over a period long enough to observe three transits of earthlike planets with longer orbital periods, their findings suggest that planets one to four times the size of Earth may be abundant in the galaxy.

Since Feburary 2011, the number of Earth-size planet candidates has doubled and the count of super-Earth-size candidates is now 40 percent higher than before.

The Kepler team has now revised its estimate of the number of habitable-zone planets to 48, down from 54 reported in Feburary. This decrease results from an updated definition of the “habitable zone” which now accounts for the warming effect of planetary atmospheres. This change moves the habitable zone further away from the star and, as a result, certain stars with shorter orbital periods are no longer classified as existing within the habitable zone.

“The tremendous growth in the number of Earth-size candidates tells us that we’re honing in on the planets Kepler was designed to detect: those that are not only Earth-size, but also are potentially habitable,” said Natalie Batalha, Kepler deputy science team lead at San Jose State University in California. “The more data we collect, the keener our eye for finding the smallest planets out at longer orbital periods.”