HILO, Hawaii: Residents across the Island of Hawaii reported feeling an earthquake around 4:36 p.m. on Sunday. The United States Geological Survey’s Hawaiian Volcano Observatory measured a magnitude 5.0 about 4 miles south of the active Pu’u O’o crater on the Kilauea volcano’s east rift zone, within the Hawaii Volcanoes National Park. The hypocentral depth […] 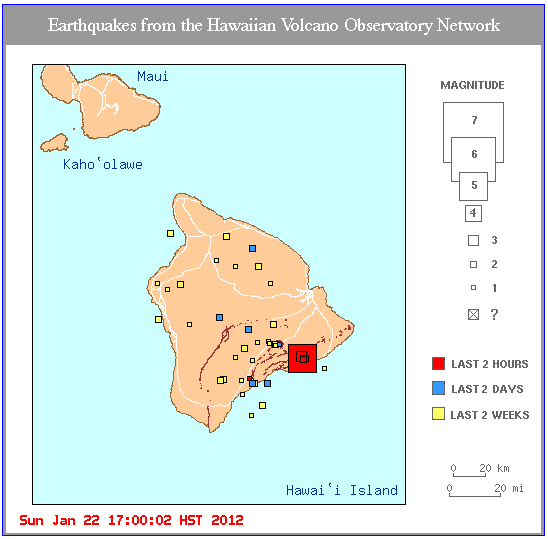 HILO, Hawaii: Residents across the Island of Hawaii reported feeling an earthquake around 4:36 p.m. on Sunday.

The hypocentral depth was reported to be about 5 miles deep.

There was no threat of a tsunami from the quake and no reports of damage, initially.

Residents around the island reported feeling the quake, from as far north as Hawi to as far west as Kona.

A series of smaller quakes were reported after the quake, all in the same vicinity. The largest of those to be measured was a 3.0, less than 10 minutes after the first.

The U.S. Geological Survey’s Hawaiian Volcano Observatory (HVO) recorded a magnitude 4.7 earthquake located beneath Kilauea volcano’s south flank on Sunday, January 22, 2012, at 4:36 p.m. HST. This earthquake was centered near Holei Pali about 7 km (4 mi) south of the Pu‘u ‘O‘o crater and 15 km (9 mi) west of Kalapana, at a depth of 8 km (5 mi).

The earthquake was widely felt on the Island of Hawai‘i. The USGS “Did you feel it?” Web site (http://earthquake.usgs.gov/eqcenter/dyfi/) received 600 felt reports within two hours of the earthquake.

The magnitude-4.7 earthquake was followed by 20 aftershocks in two hours in the same area, the largest of which was magnitude-3.1.

The Holei Pali area of Kilauea’s south flank has been the site of 16 earthquakes of magnitude-4.5 or greater during the past 50 years, with 8 since 1983. Most are caused by abrupt motion of the volcano’s south flank moving southeast over the ocean crust at an average rate of 6.5 centimeters per year (2.6 inches per year) as a result of magma injected into the rift zone.

The earthquakes caused two small collapses of the West Ka‘ili‘ili lava delta that has been inactive since late December 2011. There were no other effects apparent on Kilauea’s ongoing eruptions or on Mauna Loa. HVO monitoring networks have not detected any significant changes in activity at the summits or rift zones of the volcanoes.

For eruption updates and information on recent earthquakes in Hawai‘i, visit the Hawaiian Volcano Observatory website at http://hvo.wr.usgs.gov.