UPDATE: (9:06 p.m.) Hawaii Fire Department reports that all roads in the Kona area are now open. Please use caution in the Pines Subdivision area as fire crews will remain at the scene overnight to monitor conditions.

UPDATE: We have just updated this story with video from Chip Begay, which includes two interviews with Pines subdivision residents Charles and Wanda Woody.

Reports say residents of the Pines subdivision were evacuated. No homes have been damaged by the fire that broke out around 1:30 p.m. and consumed 35 acres.

The American Red Cross opened a shelter at Kekuaokalani Gym, also known as the Old Airport Gym, in Kailua-Kona for the evacuated residents.

Hawaii County Civil Defense says firefighting operations are still underway in the Kona Area. “Due to the brushfire, motorists are asked to avoid Kuakini Highway between Palani Road and Honalo,” said the Civil Defense message. “Southbound motorists on Mamalahoa Highway are requested to use Palani Road to Alii Drive. Northbound motorists on Kuakini Highway are requested to use Highway should use Highway 180 to Palani Junction. Also, Hokulia Bypass will remain open until 9:00 PM.”

Reports say the fire came dangerously close to homes, but were brought under control. The fire is not yet contianed. A fire department helicopter was performing fire drops earlier in the day. 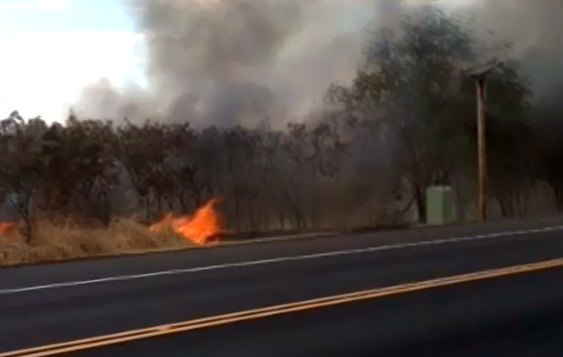