Ane Keohokalole Highway will be extended one mile north for $3.24 million Video by David Corrigan KONA, Hawaii: Mayor Billy Kenoi was smiling so big he was nearly in tears. That’s because on Tuesday, it was announced that Hawaii County will be able to complete an additional mile of the highly anticipated Ane Keohokalole Highway – referred to as phase […] 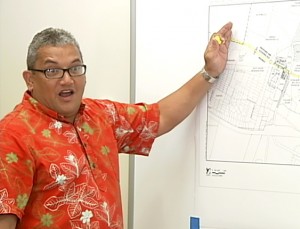 Ane Keohokalole Highway will be extended one mile north for $3.24 million

KONA, Hawaii: Mayor Billy Kenoi was smiling so big he was nearly in tears.

That’s because on Tuesday, it was announced that Hawaii County will be able to complete an additional mile of the highly anticipated Ane Keohokalole Highway – referred to as phase 1 A – since so far the massive project has been on time and under budget.

In a conference room filled with media and project officials, the mayor discussed how the county and contractor Nan Inc. have entered into a $3.24 million agreement that will complete an additional mile of road, which will parallel and about a mile mauka of the Queen Ka’ahumanu Highway from Palani Road to Hina-Lani Street in Kaloko. The entire two and a half miles of highway is scheduled to open at the same time in May.

The mayor used a map to illustrate. The additional mile of highway will consist of two lanes with a concrete surface and enough space to expand to four lanes. There will also be some resurfacing work at Hina-Lani Street as well as added left-turn pockets.

The county is aiming to have the highway open before the state’s Queen Ka’ahumanu Highway widening project between Honokohau Harbor and Kona International Airport creates a traffic nightmare. The completed Ane Keohokalole Highway will give motorists an alternative route when traffic is heavy.

Ground was broken on the first phase of the $29.9 million Ane Keohokalole Highway project on March 30, 2010, and was originally planned as a mile and a half of highway from Palani Road to the West Hawai`i Civic Center . The county says the project represents not only the largest expenditure of federal stimulus money in Hawaii, it also is one of the first major roads to be built by Hawaii County in Kona since statehood.

The project was awarded to Nan Inc. of Honolulua and also involves two preservation efforts at each end of the road. An interpretive center and cultural preservation area valued at more than $3 million is being built by Queen Liliuokalani Trust at the Palani Road end of the project, while a $500,000 partnership between the county, Stanford Carr Developments and the U.S. Fish and Wildlife Service to preserve one of Hawaii’s last remaining dryland forests is underway at the Hina-Lani Street intersection.

Ane Keohokalole Highway will also facilitate the state’s development of the state’s Kamakana Village affordable-housing project, commercial development by the Queen Liliuokalani Trust to support children’s programs, and the Department of Hawaiian Home Lands’ expansion of Laiopua Village and its planned community center.