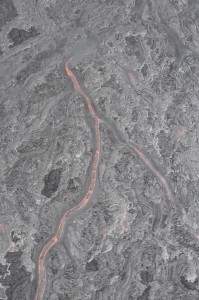 Lava is swiftly moving towards the northeast

The footage has been posted by the United States Geological Survey’s Hawaiian Volcano Observatory.

In a summary accompanying the video, the HVO says “The lava is swiftly moving towards the northeast, and this represents lava within crater that is entering the lava tube system which, in turn, feeds the active flow field. The movie continues with a flight along this active lava tube system, with the trace of the tube evident by numerous fuming points. The movie ends just short of the area of active pahoehoe breakouts, where lava exits the tube system onto the surface. These flows were active about 300 m (330 yards) north of the boundary of Royal Gardens subdivision.”

The tiltmeter on the north flank of Pu`u `O`o cone recorded the start of DI deflation at 9:20 am yesterday and, as of this morning, had not yet shown signs of the expected inflation. Within Pu`u `O`o crater, glow was visible from sources on the northeast and southeast edges of the crater floor and was strongest from the collapsed cone on the northeast edge; on yesterday’s overflight, geologists were able to get a view into the collapsed cone that was rapidly venting hot gas; “its collapse pit was filled with a swiftly moving stream of lava heading to the northeast, presumably into the tube system” (see images). Seismic tremor levels near Pu`u `O`o were low. The most recent (preliminary) sulfur dioxide emission rate measurement was 500 tonnes/day on January 29, 2012, from all east rift zone sources; new measurements must await the return of moderate trade winds.

Background: The eruption in Kilauea’s middle east rift zone started with a fissure eruption on January 3, 1983, and has continued since at Pu`u `O`o Cone, or from vents within a few kilometers to the east or west, with few interruptions. In early August, 2011, the Pu`u `O`o crater floor collapsed to a depth of about 75 m (245 ft) below the east rim of the crater as lava burst from vents on the lower west flank of the cone. A DI tilt event several days later cut off supply to Pu`u `O`o and the west flank vents; lava reappeared in Pu`u `O`o Crater on August 21st and filled it to overflowing. A fissure eruption on the upper east flank of Pu`u `O`o Cone on Sept. 21, 2011, drained the lava lakes and fed a lava flow that advanced southeast through the abandoned Royal Gardens subdivision to the ocean within Hawai`i Volcanoes National Park in early December. The ocean entry has been inactive since late December and the flows have been weakly active above the pali since mid-January. In general, activity waxes with inflation and wanes with deflation. 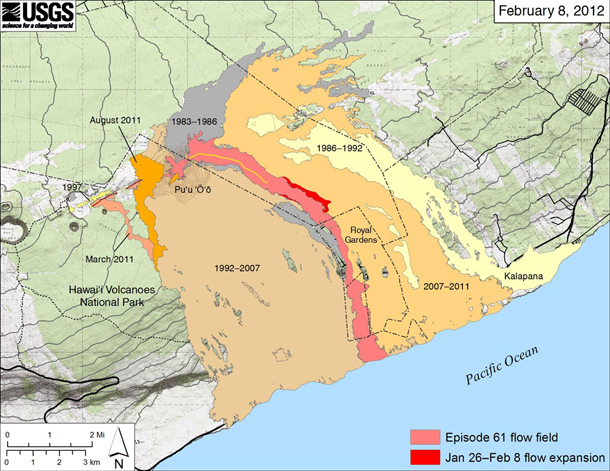