The U.S. Department of Agriculture (USDA) has renewed a disaster declaration for Hawai'i Island due to volcanic emissions from Kilauea Volcano. 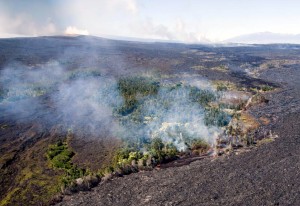 Media release from Office of the Governor

HAWAII ISLAND: The U.S. Department of Agriculture (USDA) has renewed a disaster declaration for Hawai’i Island due to volcanic emissions from Kilauea Volcano. The declaration is in response to a request from Governor Neil Abercrombie on December 27, 2011, citing continued agricultural production losses caused by vog.

“Many farmers and ranchers on Hawai’i Island continue to have a difficult time with the cumulative effects of vog on their crops and livestock operations,” said Governor Abercrombie. “The federal disaster designation renews our access to emergency federal loans and other assistance programs in this ongoing situation.”

Agricultural damages reported in Hawai’i County include: damage to vegetable crops (especially leafy greens), some orchard crops, flowers and foliage (including those under greenhouses).
Ranchers have experienced adverse impacts on range grasses and premature corrosion of fencing, gates and other metal infrastructure.

Hawai’i County agricultural producers who want to apply for emergency loans due to damage caused by volcanic emissions must do so before August 2012. For more information regarding emergency loans and other available assistance, contact the Hilo office of the USDA Farm Service Agency at (808) 933-8381 extension 2.