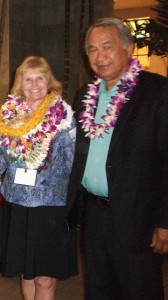 Teri King-Agan received the Excellence in Service Award at the Friends of the Library of Hawaii’s Annual Meeting on Feb. 23

Teri King-Agan, of Mountain View, has been with the library system for 15 years.  She began her career in Hilo, then moved on to Kea‘au Public and School Library.  As a library technician, she created a variety of programs, including developing a color-coded video catalog system.  She has also simplified a technique in teaching novices on how to use the computer-based collection catalog.

“Ms. King-Agan is truly an asset to the Kea‘au community.  She is dedicated to her work and has created programs to stimulate community engagement,” said Senator Gilbert Kahele, who represents Ka‘u, Puna and Hilo.

Each year, Friends of the Library of Hawai‘i presents the Excellence in Service Awards to recognize those who work “in the trenches” as library assistants, technicians, janitors, or in other capacities.  The Librarian of the Year Award was also given last night.