The home of "Lava" Jack Thompson, which at one time served as an off the beaten path destination for tourists looking for a one-of-a-kind encounter, has been destroyed. 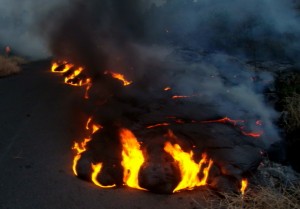 ROYAL GARDENS, Hawaii: Fate has finally caught up with the man who has outlasted all his less fortunate neighbors in the Royal Gardens subdivision, which has been obliterated by lava flows from the east rift of Kilauea volcano.

The home of “Lava” Jack Thompson, which at one time served as an off the beaten path destination for tourists looking for a one-of-a-kind encounter, has been destroyed. A fast moving lava flow from the Pu`u O`o crater four miles up slope invaded the forested kipuka surrounding his home on Friday night.

Thompson and lava photographer Leigh Hilbert were airlifted out of town by Paradise Helicopters just before nightfall, as the lava was an estimated 100 feet from the home.

Today, sources say the home was covered by lava over night.

Until yesterday, Thompson – a quasi-celebrity among the so called “lavatics” who live in the volcano’s destructive path on the Big Island of Hawaii – was the last man standing. All the surrounding homes have been burned down by lava since the current eruption began in 1983.

On numerous occasions, lava flows have veered around Thompson’s home, miraculously sparing it from the same fate that every other structure has been dealt. However, most felt it was only a matter of time before the volcano took Jack’s residence, too.

You will find an account of the final moments at Jack’s house on Hilbert’s Hawaiian Lava Daily blog.

The USGS Hawaiian Volcano Observatory chronicled the plight of Royal Gardens in a Volcano Watch article written in January 2008, when lava once again threatened to descend into the subdivision.

Royal Gardens holds the dubious distinction of being the only inhabited area to be repeatedly invaded by lava flows throughout the 25-year span of the current eruption. It was the scene of the first house to be claimed by lava, back in March 1983, and it is also the site of the latest destruction–a long-abandoned house overrun in early 2007.

It’s no surprise that Royal Gardens is a frequent destination for lava flows. The upper edge of the subdivision is only 5-6 km (3.1-3.7 mi) from Pu`u `O`o and Kupaianaha-the main vents of the past 25 years-and from the July 21 fissures.

Royal Gardens is not the only subdivision situated immediately adjacent to Kilauea’s east rift zone. It holds the record, however, as the steepest subdivision on the volcano. Its streets run straight up Pulama pali, rising 1,400 vertical feet in just 3 km (2 mi).

Newcomers to the island might be surprised at the very existence of Royal Gardens. As with most of east Hawai`i’s large subdivisions, Royal Gardens was the product of a speculative development spree that began in the late 1950s. Supported by both state and county officials, developers laid grids of substandard streets across vast tracts of land with no thought to sustainability, topography, or natural hazards. (This era in Big Island history rates its own chapter in Cooper and Daws’ fascinating book, “Land and Power in Hawaii,” published in 1985.)

Royal Gardens was heavily advertised on the mainland, and an estimated half to two-thirds of the lots were bought sight unseen. By the time the current eruption began, most of the 1,500 lots in Royal Gardens had been sold, but fewer than 75 houses were built.

That was fortunate, because from 1983-1985, `a`a flows fed by lava fountains from Pu`u `O`o overran the upper slopes of the subdivision during 7 eruptive episodes. Residents lived on edge in those years, when every 3-4 weeks towering lava fountains lit up the sky and rattled the windows. Sixteen houses were overrun, and 20 percent of the subdivision was inundated. Streets running straight down the pali formed convenient pathways for the `a`a flows, which filled them to a depth of 5-10 m (16-33 ft).

In July 1986, the eruption shifted 3 km (1.9 mi) downrift to the Kupaianaha vent. For the next five years, flows whittled away at the eastern side of Royal Gardens and wrapped around its lower end. By the end of 1991, less than 50 percent of the original subdivision was still exposed, and 39 houses had been destroyed.

Highway 130 was closed for good in early 1987, as tube-fed flows from Kupaianaha established a thoroughfare to the ocean. For the next 13 years, determined residents bulldozed a succession of short-lived access roads to Royal Gardens. The last such road was buried in 2000.

In early 1992, Kupaianaha died, and the eruption returned to flank vents on Pu`u `O`o cone. From 2000 to early 2007, flows approaching from the west encroached on the lower end of the subdivision, overlapping the Kupaianaha flows. During this time, 6 more houses were overrun.