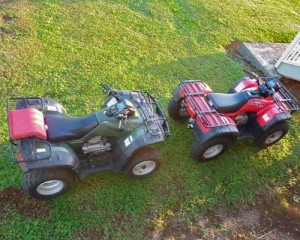 LAUPAHOEHOE, Hawaii: Big Island police are investigating the theft of two ATVs from a home in Laupāhoehoe.

Sometime between February 12 and February 24, one or more unknown persons removed a light green, 2008 “Rancher” 4-wheel Honda ATV, model 2RX420, and a red, 2001 “Foreman” 4-wheel Honda ATV from a home on Kihalani Homestead road in Laupāhoehoe.

Police ask that anyone with information about this case call Officer Emerson Paranada at 775-7533 or the Police Department’s non-emergency line at 935-3311.