This week, we look back on the day of destruction, and its effect on the island. 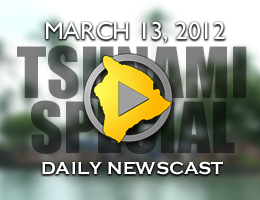 Mahalo to Visionary Video for all their coverage of this event, both last year and this year.

This week, we look back on the day of destruction, and its effect on the island. We will share new video from that day, and follow up on stories from ground zero, to see how these people who were directly impacted are doing today, one year later.

A large wave injured an elderly couple swimming in a Puna tidepool on Sunday afternoon, at around 3:30 p.m., Hawaii County firefighters said.

The married couple, a 74-year-old man and 63-year-old woman, were able to get out of the water at Orr’s Beach on their own, however they suffered some injuries in the incident.

The couple was airlifted by Chopper One to Papio Park and taken by ambulance to Hilo Medical Center. There was no word on their conditions.

News videogrpaher Daryl Lee was on the scene, where he interviewed the councilman of the Puna district, Fred Blas.

The National Weather Service had issued a high surf advisory for East facing shores of the Big Island until 6 p.m. Monday

Stories in this segment:

The first is in Waimea, where 7 trees were stripped of their bark here at the Anuenue Playground, apparently left to die.

No monetary value has been placed on the damaged koa and calliandra trees, which were planted in 1994 by members of the Waimea Outdoor Circle to provide needed shade around the playground and park benches.

The West Hawaii Today newspaper was the first to report on the vandalism, which police say seems to have occurred over the first weekend in march. as of last Thursday, police said there are no leads or suspects.

In Puna, Big Island police are investigating the theft of longan fruit from several Kurtistown farms.

Multiple thefts were reported between February 21 and March 8 . During that time, 20 longan plants and more than 1200 pounds of fruit were stolen. These types of agricultural thefts constitute a felony offense.

The longan – translated literally as “dragon eye” — is so named because it resembles an eyeball when its fruit is shelled. It is native to Southeast Asia and is often used in Chinese cuisine.

Police ask that anyone with information about these thefts call Officers Scott Amaral or Sandor Finkey at 965-2716 or the Police Department’s non-emergency line at 935-3311.

And in Laupahoehoe, Big Island police are investigating the theft of two ATVs from a home on Kihalani Homestead Road.

Police ask that anyone with information about this case call Officer Emerson Paranada at 775-7533 or – once again – the Police Department’s non-emergency line at 935-3311.